‘The Northman’ aims to tell Viking tale with accuracy and action 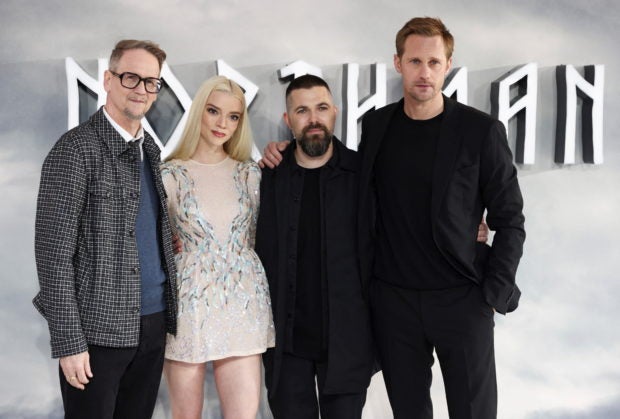 LONDON — Filmmaker Robert Eggers says his new star-studded revenge epic “The Northman” is both a big popcorn movie and a truthful portrayal of Viking culture and mythology.

Set in 895, the film stars Alexander Skarsgard as Viking prince Amleth, who flees his home in the North Atlantic after his uncle (Claes Bang) brutally kills his father, King Aurvandil (Ethan Hawke).

Years later, Amleth, disguised as a slave, travels to Iceland where his uncle and mother, Queen Gudrun (Nicole Kidman) now live, to avenge his father’s murder and to rescue his mother. Along the way he meets a mysterious woman, Olga (Anya Taylor-Joy), with whom he forms the first real human connection since his childhood.

“The Northman” is produced by Skarsgard, who had spent several years developing a Viking epic before meeting Eggers.

“It’s been a dream of mine since I was a little kid growing up in Sweden, surrounded by runestones,” he said.

Skarsgard, 45, went through a physical transformation to play the burly Viking, working with his “Tarzan” trainer Magnus Lygdback.

“When Amleth transforms from his human state to his spirit animal, he becomes a hybrid of a bear and a wolf, so it was important to bulk up a bit and get a bit bigger,” he said.

The movie’s violent, large-scale action scenes were a first for Eggers, who has previously directed two feature films, “The Lighthouse” and “The Witch.” It involved meticulous planning and organization to keep his hundreds of extras, stunt performers and animals on track.

“He loves authenticity, he loves very long takes, scenes with no cuts. It’s quite challenging shooting big, big action set pieces with just one camera, one shot. So we had to rehearse them many, many times and work on that choreography and the relationship between the characters and the camera,” said Skarsgard of the experience.

“The Northman,” which also features Icelandic singer Bjork in her first big screen appearance in 17 years, is released in cinemas around the world in April. JB