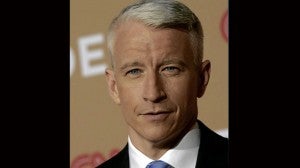 COOPER. His re-imaging campaign has had to surmount a number of big stumbling blocks.

ANDERSON Cooper has a problem: He’s a competent and acclaimed broadcast journalist, but he’s regarded by some viewers as both a nerd and a bore. When he was given his own, self-titled daily TV talk-interview show to host, therefore, the new program leaned over backward to stress his more likable and “fun” side—with mixed results.

Anderson Cooper as a more accessible and empathetic TV host is still a work in progress, because his re-imaging campaign has had to surmount a number of big stumbling blocks:

First, his social pedigree is unimpeachable (the Gloria Vanderbilt is his mother). That brings with it a kind of cachet that could alienate less privileged and more insecure viewers.

Second, his platinum-blond and bland looks make him come across as arch, austere and inaccessible. Third, his career-long devotion to facts rather than subjective opinion makes it even more difficult for “ordinary” viewers to relate to him.

The thing is, if you want to come across as the male, WASP version of Oprah Winfrey, whose career is based on her sainted subjectivity, something’s got to give. So, the determined effort to “democratize” and profitably popularize and thus merchandize Anderson Cooper proceeds apace, and the wilder or more attention-calling the gambit, the better—or not.

Translation: Grown-up losers who turned real women off, so they had to “play” with those weird life-sized, inflatable “female” plastic playthings with mouths perpetually agape.

Some decades ago, lame losers interacted with their compliant plastic playmates in the privacy of their bedrooms—but, in keeping with the shamelessly tell-all, show-all times, some of them have now gone public and have agreed to be interviewed on TV—which just goes to show how in-your-face and let-it-all-hang-out some people have become.

So, the producers of Cooper’s show may have felt that the shocking topic was just what the ratings doctor ordered to help give the TV host the edge, raciness and whiff of controversy he “needed” to not strike some viewers as bland, blond and boring.

True enough, the show’s viewers perked up when Cooper featured the losers and their dolls on his show recently. However, he looked ill at ease during the entire feature—and, who could blame him?

To make things worse, his creepy guests resorted to all sorts of hokey rationalizations for their adolescent proclivities, so he naturally got on his ethical high horse, and the feature further degenerated into a hortatory hemming-and-hawing exchange.

A more with-it and satirical interviewer would have opted for a more derisively scathing approach, which would have pithily punctured the Dirty Young Losers’ literal balloons, but Cooper was too Simon-pure to do that, so the show didn’t warm up and popularize his TV image.