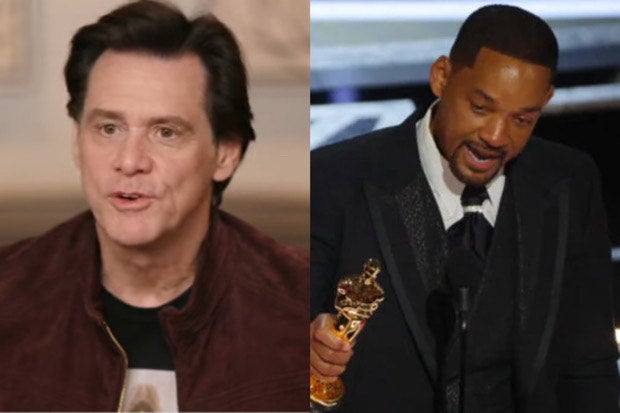 Jim Carrey expressed dismay over Will Smith’s behavior of slapping comedian Chris Rock after being offended by a joke, as well as the standing ovation Smith got after the incident when he won his first Oscar.

Carrey spoke about how the standing ovation was a “sickening” moment, during an interview with TV host Gayle King in an episode of “CBS Mornings,” as seen on its YouTube channel yesterday, March 29.

“I was sickened by the standing ovation. I felt like Hollywood was just spineless en masse,” the veteran comedian-actor said. “It really felt like this was a clear indication that we’re not the cool club anymore.”

Carrey clarified that he has nothing against Smith who has “done great things,” but stressed that Smith’s action towards Rock was way out of line. Carrey also added that he would have sued Smith for $200 million dollars if he were Rock, noting that the insult he caused is “going to last a long time.”

“If you want to yell from the audience and show disapproval or say something on Twitter [that’s fine]. But you do not have the right to walk up on stage and smack somebody in the face because they said words,” Carrey stated.

Carrey also described the slapping incident as a “selfish moment” because it affected everyone who attended the awarding ceremony.

“It cast a pall over everybody’s shining moment last night. A lot of people worked really hard to get to that place, to have their moment in the sun and to get their award for the really hard work that they did,” he added. “It was just a selfish moment to cast a pall over the whole thing.”

Smith smacked Rock after the comedian blurted a joke on his wife Jada Pinkett Smith, referencing the 1997 film “G.I. Jane” where Demi Moore played the role of a Navy member with a shaved head. Jada has a shaved head reportedly due to alopecia. JB