A recent history of comedians being assaulted on stage | Inquirer Entertainment

A recent history of comedians being assaulted on stage 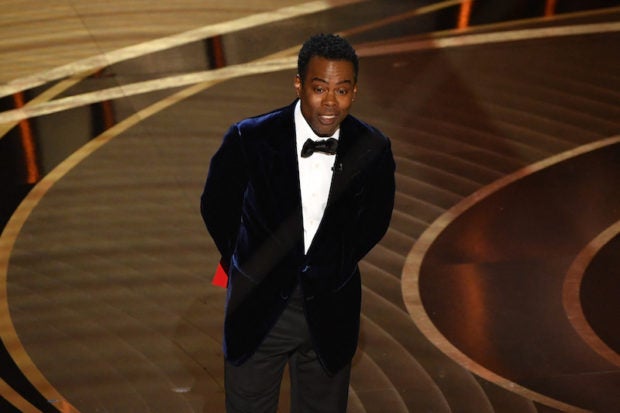 Comedians being assaulted on stage, as Chris Rock experienced at the hands of Will Smith during the Oscars on Sunday night, is extremely rare, but not unheard of.

An attack often requires something more offensive than Rock’s gag about Smith’s wife, Jada Pinkett-Smith, appearing in a “GI Jane 2,” a reference to her lack of hair, caused by alopecia.

In 1991 at the Montreal Just for Laughs Festival, infamously offensive British comedian Jerry Sadowitz opened his set with the line: “Hello Moosefuckers. I tell you why I hate Canada: half of you speak French and the other half let them.”

An audience member promptly climbed the stage and knocked him out cold.

Or there was the time that Australian comic Jim Jefferies was attacked by a man at the Manchester Comedy Store in 2007 in northwest England.

It appeared the man had not liked a line Jefferies used against another, unrelated heckler: “I’m going to leave you alone now, just like your dad did. Too bad your uncle didn’t.”

Jefferies, like Rock, managed to regain his composure and complete his set, styling out the shock by saying: “If you enjoyed my show and you want to see more of me, I’ll be getting my head kicked in in the alleyway.”

Comedians often face verbal abuse, for which they are well-trained, but security normally steps in before things turn violent.

That was decidedly not the case with Smith, who was allowed to return to his seat after slapping Rock. He was then given an Oscar for best actor and treated to a standing ovation.

Some comedians saw that as setting a dangerous precedent.

“Now we all have to worry about who wants to be the next Will Smith in comedy clubs and theaters,” tweeted American stand-up comedian Kathy Griffin.

For his part, Jefferies took to Instagram on Monday to say that comedians should boycott the Oscars, telling actors to “host their own show after the way they just treated Chris.”

Some have come to Smith’s defense. Another American stand-up comedian and actress Tiffany Haddish tweeted: “He protected his wife. And that’s what a man is supposed to do.”

But many saw an act of unhinged madness, and evidence of rampant celebrity privilege.

“OK, your wife’s having a bad time. You know who’s having an even worse time? People with alopecia who don’t also have tens of millions of dollars.”

Taylor said jokes inevitably came at someone’s expense and even if Rock’s joke was widely considered a cheap crack, it was hardly a reason for assault.

“For a start, this is TV so he probably didn’t even write the joke,” said Taylor. “But even if no one had laughed, that isn’t a license to go punch him. I still think Will Smith is pathetic.”

“Everyone has something that is too close to the bone for them — mine will be different to yours or Jada Pinkett-Smith. If I have to worry about everyone’s problem in a room, I would never say anything,” he added.

There has been much debate in recent years as to whether so-called cancel culture has forced comedians to tone down their material.

Rock is among those who have banned phones at their shows to prevent people sharing his material online.

But Taylor said cancel culture was not a real problem.

“Comics are just as rude and outspoken as they have always,” he said. “But what sometimes happens is you have a room with 400 people, and everyone laughs at a joke, but one person goes home and tweets that their particular issue has been triggered.”

“And that gets traction because they’re followed by people with a similar issue, and it makes it seem to journalists that there is a problem.”

In fact, the opposite is true, he said, since the internet has allowed comics to build a fan base without relying on traditional gatekeepers.

“There’s this massive notion of being cancelled, but cancelled from what? No one watches TV anymore.”

Is Taylor more worried about being knocked out, then?