‘Surreal, bittersweet’: Norman Reedus on saying goodbye to ‘The Walking Dead’ after 12 years 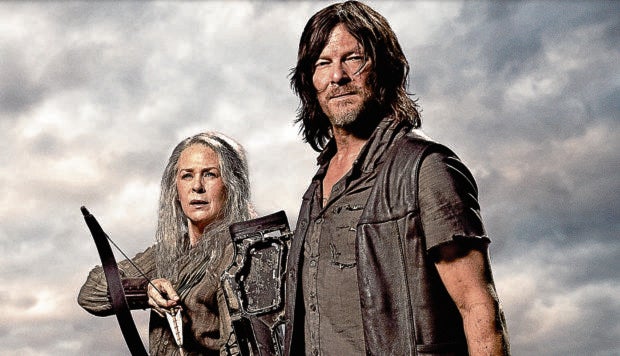 For Norman Reedus, who plays Daryl Dixon in AMC’s “The Walking Dead,” the idea of saying goodbye to the show is “kind of bittersweet.” After all, how do you leave behind a TV series that has been a huge chunk of your life for 12 years?

“I mean, “The Walking Dead” has been such a huge part of our lives in every way you can imagine,” mused Norman when we talked to him last year about its imminent end. The 53-year-old actor-model was seen this week in Episode 14 of the immensely popular zombie series’ 24-part 11th and final season.

“But, you know, my hope is that we really go out big,” he quipped. “I feel like we owe it to ourselves and the fans … for the show to really go out with a bang.

“I’m just as curious as you are because how it ends will dictate how Daryl and Carol Peletier’s (Melissa McBride) spinoffs would start. So, I’m hoping that the spinoff will be shot out like a cannon.

Somebody you can rely on

“It’s wild because we’ve had many people come and go, and we’ve made so many friends here. It’s become a yearly routine for us. It’s not like, ‘Oh, I come here for a while to shoot the show, then go back to my life.’ Like, it’s been the dictating factor of my everyday life every week for years. And my cat loves it here (laughs)!

“We learned about the spinoff before we got the news that this [Season 11] was going to be the final season of ‘The Walking Dead.’ So I had already put it in my mind that both shows will be going on at the same time. So, when the last announcement happened, it was very surreal.”

When we asked Norman what aspect of Daryl’s character development or growth resonated with him the most, the actor said, “Daryl, who first appeared in the third episode of first season, started off as such a hothead with a chip on his shoulder. But you know, he originally intended to rob the group—that was his plan.

“Because of the circumstances, Daryl found a way to do the just opposite. He used to talk out of the side of his head, and he couldn’t look you in the face … because he didn’t like himself. But like Carol, he grew to be respected. He got to a point where he felt valued and decided to think for himself. “With a lot of conversations, the show’s writers helped me do that … and I feel like, now, Daryl has become somebody you can rely on. He’s honest—like, he never lies … ever! And he’s not really hung up on the aesthetic part of things that get in his way of becoming that honest person, which has helped him grow up. He has matured, and I think that was really good for him.”

Is he involved with the development of his character?

“Yes, I am … a little bit,” Norman admitted. “For example, when I was first written onto the show, Daryl was taking drugs and was saying racist things. I was doing a lot of stuff that Merle would do. So, I spoke with the writers and the showrunners and said, ‘Can I not do that? Can I be the opposite of that?’

“Instead of going that direction, storywise, Daryl could have grown up with that, but hated that part about his life and his family. Otherwise, I would become just another Merle. So, that changed to a point where, once I got the chance to not be someone like that, I was able to stand up for myself and make my own decisions. I became like a grownup. “That way, Daryl turned into a real person, instead of somebody who was ignorant … or someone trapped in that sorry situation.”