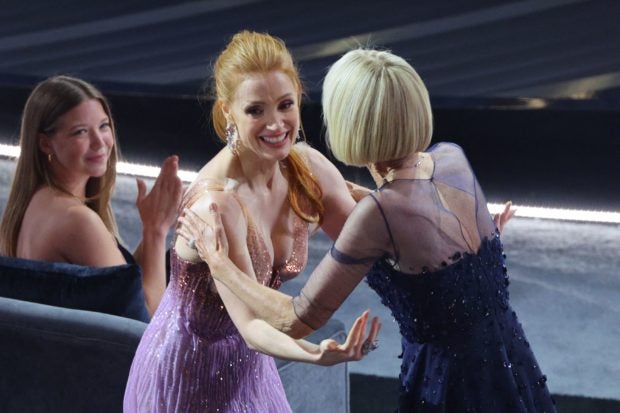 LOS ANGELES — Jessica Chastain won the Academy Award on Sunday for best lead actress for her mascara-laden title role as the on-air preaching partner and wife of Christian televangelist Jim Bakker in “The Eyes of Tammy Faye,” chronicling the couple’s rise and fall.

The Oscar triumph for Chastain, 45, virtually unrecognizable in heavy makeup as Tammy Faye Bakker, followed a Screen Actors Guild Award for her performance and capped the third Academy Award nomination of her career.

She was previously nominated for an Oscar for 2012 portrayal of a CIA analyst on the hunt of Osama Bin Laden in “Zero Dark Thirty” and her 2011 supporting role as a Southern socialite in the 1960s racial drama “The Help.”

But their lucrative empire crumbled in a series of highly publicized sex and financial scandals in 1987, ending with Jim Bakker’s conviction and imprisonment on multiple fraud charges and the couple’s divorce.

Tammy Faye later married and took the last name of developer Roe Messner as she rebuilt her reputation through a documentary and reality show before her cancer death in 2007.

Although the film drew mixed reviews, critics credited Chastain with rendering a nuanced, sympathetic portrayal of a figure much-lampooned in her day for her outlandish makeup and clothing styles and an emotional television persona bordering on histrionic.

Chastain has said she spent several hours a day on set in the makeup chair having facial prosthetics applied and recreating the famously heavy eyelashes that streamed mascara when Bakker cried on camera.

Co-starring actor Andrew Garfield as Jim Bakker, the film focuses on Tammy Faye’s point of view, highlighting her defiance of conservative evangelical leaders by preaching acceptance of LGBT individuals and people with HIV at the height of the AIDS epidemic.

Born in Sacramento, California, Chastain graduated from the Juilliard School and worked on television and live theater before making her film debut in 2008 as a sexually abused teenager in “Jolene,” inspired by the Dolly Parton song of the same title.

She went on to co-star in such films as Terrence Malick’s 2011 ethereal drama “The Tree of Life” opposite Brad Pitt and the sci-fi hits “Interstellar” with Matthew McConaughey and “The Martian” with Matt Damon in 2014 and 2015.

She is married to fashion executive Gian Luca Passi de Preposulo, with whom she has two children. JB