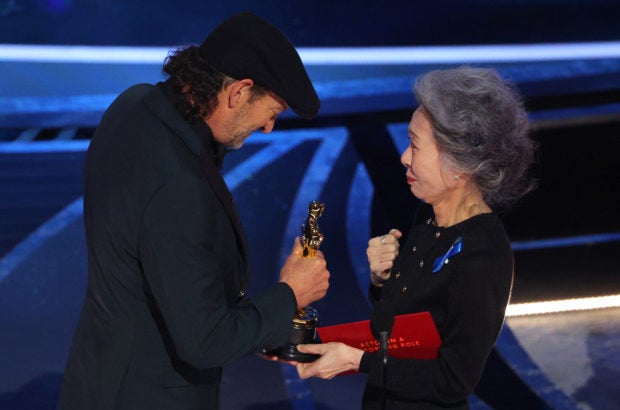 LOS ANGELES — Troy Kotsur became the first deaf man to win an Oscar, taking the Academy Award on Sunday for best supporting actor for his role as a fisherman and father in family drama “CODA.”

Kotsur, 53, has worked for over three decades in theater, television and film for both deaf and hearing audiences.

In “CODA,” an acronym for “child of deaf adults,” Kotsur plays Frank Rossi, the father of teenager Ruby who struggles to help her family’s fishing business while pursuing her own aspirations in music.

The only other deaf person to win an Oscar was Kotsur’s “CODA” co-star Marlee Matlin. She won best actress for her role in 1986 romantic drama “Children of a Lesser God.”

Kotsur was born deaf and grew up in Arizona as the only non-hearing member of his family, attending the Phoenix Day School for the Deaf and a suburban high school in Mesa.

Most of Kotsur’s credits come from the theater, with roles in “Of Mice and Men,” “A Streetcar Named Desire” and a Broadway production of “Big River: The Adventures of Huckleberry Finn.”

He also appeared in an episode of “Star Wars” television series “The Mandalorian” and created a fictional sign language for the Tusken Raiders on the planet Tatooine.

Kotsur earned the supporting actor honor over Ciaran Hinds for “Belfast,” J.K. Simmons for “Being the Ricardos” and Kodi Smit-McPhee and Jesse Plemons, both nominated for their roles in “The Power of the Dog.” JB