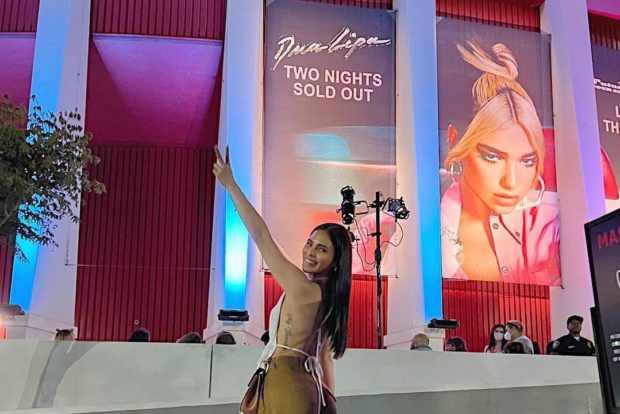 Lovi Poe was elated after she got to see pop star Dua Lipa perform live at the “Future Nostalgia” concert in Los Angeles, California.

The actress can be seen singing and dancing as Lipa performed her hit song “Levitating” in front of concert-goers, as seen on Poe’s Instagram page yesterday, March 25. Poe attended the concert with her boyfriend, British producer Monty Blencowe.

“Absolutely on a ‘Future Nostalgia’ hangover. This was a much much needed break and night out with one of my [favorites] @dualipa. Thank you Bubba for this treat,” she told her boyfriend.

Poe also showed herself enjoying a drink, kissing Blencowe and posing in front of the concert stadium.

Poe is set to star alongside actor Piolo Pascual in the Philippine adaptation of the Korean drama “Flower of Evil.” She also recently wrapped up shooting for the Idris Elba-produced film “The Chelsea Cowboy,” where she played British blues singer Dana Gillespie.

Read Next
Pia Wurtzbach, Iris Mittenaere, Demi-Leigh Tebow chosen as hosts of Miss Universe PH 2022
EDITORS' PICK
House energy committee chair Arroyo bats for cheap electricity
Karding damage to infrastructure at P23M
Bongbong Marcos says PH ‘open for business’ with new Clark Airport terminal
Individuals affected by ‘Karding’ now over 157,000
Reignite your passion with the vivo Y35
Newbie gamers are in for a treat with the power-packed feature of vivo Y16
MOST READ
Angelica Panganiban ‘duguan, sugatang mom’ one week into breastfeeding
LPA enters PAR, may develop into tropical depression
Badoy not with Office of the President, NTF-Elcac, under Marcos admin — solon
Charges readied vs gov’t guard with P290-M deposits
Don't miss out on the latest news and information.