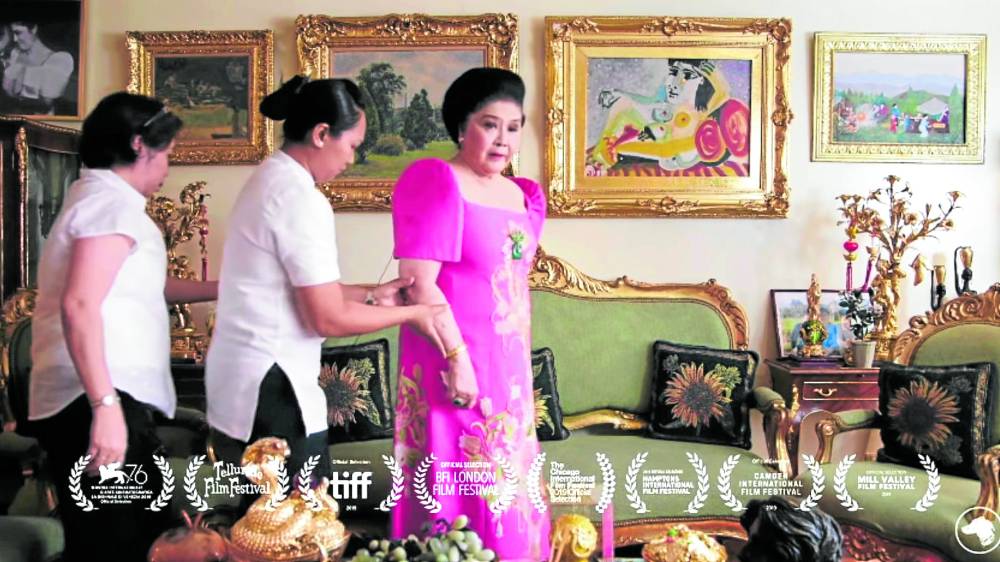 FOR A WIDER AUDIENCE A scene from the trailer of “The Kingmaker,” a 100-minute American documentary on the Marcos dictatorship, featuring former first lady Imelda Marcos and directed by Lauren Greenfield. —Screengrab from YouTube

What is real—truth or perception?

As social media continues to be inundated with false and misleading claims in favor of presidential candidate Ferdinand “Bongbong” Marcos Jr., a critically acclaimed documentary on the Marcos dictatorship will soon be dubbed and subtitled in local languages in order to reach a bigger audience in the Philippines.

The 100-minute American documentary “The Kingmaker” presents the dictatorship from the perspective of Imelda Marcos, former first lady and Marcos Jr.’s mother. While the film has recently been made available for free viewing online, its director Lauren Greenfield announced efforts to further expand its reach by dubbing it in Filipino and subtitling it in Bisaya, Ilocano, Bicolano and Hiligaynon.

Social media pages devoted to Marcos Jr. and his candidacy have painted the martial law years as a “golden age” in the Philippines, ignoring the documented fall of the economy as well as the thousands of Filipinos recorded to have fallen victim to killing, torture, forced disappearance and other human rights violations. “Obviously, it’s so rampant,” Leni Velasco, secretary general of the rights group Dakila, said on Friday when asked about the prevalence of fake news and misinformation during the election campaign.

“Films like these help people understand the martial law years better and the dark period of the Marcos dictatorship,” she told the Inquirer, referring to “The Kingmaker.”

Dakila has been actively organizing screenings of the award-winning documentary to address “the disinformation and historical distortion going on [vis-à-vis] the martial law years and the Marcos dictatorship.”

According to Velasco, who is also the executive director of the rights education institution Active Vista, she and her colleagues considered dubbing and subtitling the documentary in local languages on the suggestion of overseas Filipino workers who had watched it. Greenfield herself supported the idea.

Marcos Jr. is currently leading in presidential surveys. A recent analysis by independent fact-checker Tsek.ph showed that he had been positively benefiting from misleading claims on social media.

Vice President Leni Robredo, who is Marcos Jr.’s strongest opponent for the presidency and who defeated him for the second highest position in 2016, was found to be the biggest victim of negative messaging from disinformation.

Velasco said that Filipinos should be more discerning on social media, and that “The Kingmaker” could help debunk misleading online posts.

“It is important for people to know the truth and be provided with credible information, and not to believe in everything they see online. We have to be critical of the things we see, the videos that we watch. This is a documentary and it comes right out of Imelda Marcos,” Velasco said.

She said she and her colleagues were currently in touch with schools, communities and churches across the country “to help spread the truth on what happened during the martial law years” through “The Kingmaker,” so that voters could make an informed decision in the May elections.

“In the film, there is a line where Imelda said, ‘Perception is real, the truth is not.’ As advocates, we want to remind the people that truth, and not perception, is important,” Velasco said.