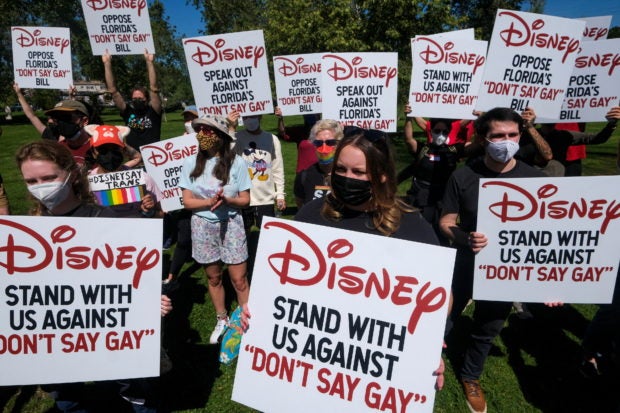 LOS ANGELES — Employees of the Walt Disney Co. staged walkouts and social media campaigns on Tuesday, March 22, to protest the company’s response to Florida legislation that would limit classroom discussion of sexual orientation or gender identity.

In a rare public demonstration of unrest, about 60 Disney employees gathered at a park outside of Los Angeles, where they wielded signs calling on Disney to “protect LGBTQ kids” and chanted “Disney say gay. We won’t go away.”

“A lot of people enjoy working for Disney. And a lot of people are upset that the company they love is harming the subset of employees and their community in Florida,” said Taylor White, a technical director at Disney television.

Disney has encountered internal criticism about its public stance toward the legislation, which critics call the “Don’t Say Gay” bill.

On Tuesday, some employees walked in a demonstration around the perimeter of the nearby Disney studios lot. Other employees spoke out via Twitter. The turnout was modest for Disney, which employs some 16,000 people in Burbank and Glendale, though many are working from home because of the pandemic.

The protests culminated a week of abbreviated walk-outs during scheduled breaks, as part of a campaign dubbed the “Disney Do Better Walkout.”

The organizers called on Disney to cease campaign contributions to politicians supporting the Florida measure and to develop a plan to protect employees from such legislation. They also want Disney to halt construction in Florida, home of the company’s flagship Walt Disney World theme park, until the state repeals the measure, which Republican Gov. Ron DeSantis has indicated he will sign it into law. If so, it goes into effect July 1.

Disney attempted to address employee concerns through a virtual town hall for employees on Monday, March 21. CEO Bob Chapek said the company made a mistake initially remaining publicly silent on the legislation and pledged to use the moment as a catalyst for change.

“We know how important this issue is for our LGBTQ+ employees, their families and allies, we respect our colleagues’ right to express their views,” a Disney spokesperson said. “And we pledge our ongoing support of the LGBTQ+ community in the fight for equal rights.”

Ahead of Tuesday’s demonstrations, one unit within the company, Disney+, offered public support for LGBTQIA+ colleagues on Twitter, writing, “we strongly denounce all legislation that infringes on the basic human rights of people in the LGBTQIA+ community.” AP