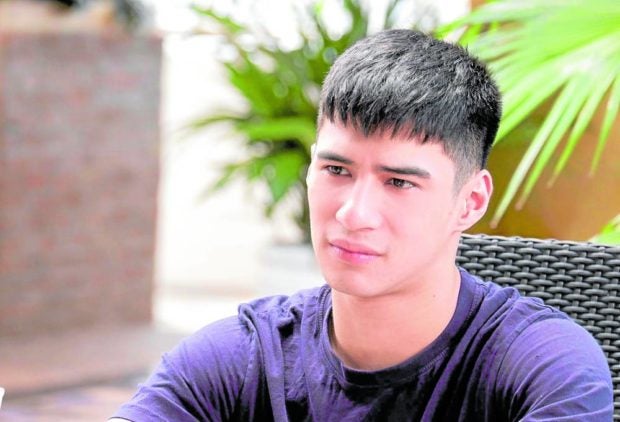 As if filming his very first love scene wasn’t difficult enough, Albie Casiño—who described himself as a “conservative guy”—had to endure the excruciating pain of putting on and taking off plaster tapes from his privates.

“It’s my first time to do a love scene, and it had to be intense,” the actor said in a recent virtual conference for the sexy drama movie “Moonlight Butterfly,” which he topbills with newbie actress Christine Bermas. “The hardest part of shooting the film was doing my love scene with Christine. I’m a conservative guy, so I have a hard time with those things.”

“It was my first time to wear plaster. That was the toughest part for me—taking it off was painful!” he added, laughing. “Christine knows this. I was tearing up! I wasn’t prepared.”

Thankfully, Albie said, their director, Joel Lamangan, guided them while filming such sequences. “There’s really no such thing as an easy scene. You have to give your 100 percent in everything you do. But work became easy in a sense that we were working with people like Direk Joel.”

Asked if he has ever been turned on by his scenes, the 28-year-old actor said that it’s something that can happen. What’s important is that he keeps things professional and channels whatever he’s feeling into the character.

“As artists, I think the passion in those scenes is needed; it’s part of it. We put ourselves in the characters and the situation. So I just use it for the scene,” he pointed out.

In “Moonlight Butterfly,” now streaming on Viva Entertainment’s digital content platform Vivamax, Albie plays Roy, a deadbeat man in a relationship with the beautiful Eunice (Christine), who works as a “GRO” in Angeles, Pampanga, to provide for their family’s needs.

Things get shaky between the two, however, when Eunice meets a rich American client, who demands that she stops seeing other men in exchange for monetary support. Asked if he would ever agree to such a setup for “practical reasons,” Albie said he can’t. “If a girl offers to buy me drinks or a meal, sure, go ahead! But if it’s to a point na kabuhayan showcase na, no!” he said, laughing.

If there’s one thing he has learned from the story, it’s that people are sometimes forced to do things they don’t want for the sake of their loved ones. “Roy is in an unconventional relationship; his girlfriend is an escort. It was unimaginable for me at first. But then, you realize the reason she’s doing it is for her family,” he said. “We should always be open-minded and not easily pass judgment on workers.”

Albie takes good care of his body and isn’t shy to show off the results of his hard work. But there was a time, he admitted, when he did have insecurities. “For a while, I did feel insecure. But after I did an underwear fashion show for a popular clothing brand, after walking down the runway wearing only briefs in front of so many people, my insecurities went away,” he said.

While he’s flattered that there are fans who admire him for his looks, Albie said he also makes it a point to take projects that will show off his acting abilities. “Being an actor isn’t just about how you act, but also how you present yourself and treat other people. Like it or not, we’re on television and we’re seen as public figures. So it’s only right to work hard and look our best,” he said.

“I’m thankful to the people who appreciate my physical appearance, but I also do projects where it’s about acting … where I don’t have to show some skin,” he added.

Finding work amid the pandemic was difficult. But after his recent stint in the reality show “Pinoy Big Brother (PBB): Kumunity Season 10,” offers started pouring in once more. He hopes to grab the opportunities coming his way.

“The past few years have been difficult. But thankfully, after I got out of the PBB house, it’s like, ‘This is a second chance,’” he said. “So I’m trying to level up my work ethic. I have been working out every day, doing appearances in ‘It’s Showtime’ and all sorts of stuff on the side. These things I wouldn’t have done in my younger years. But now I want to strike while the iron is hot.” INQ