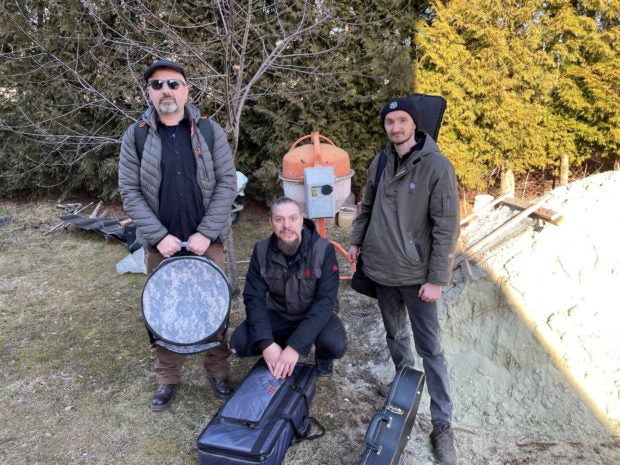 The members of the Ukrainian band Beton, Bohdan Hrynko, Andriy Zholob and Oleg Hula, pose for a picture while getting ready to go to a studio in Lviv to record their single “Kyiv Calling,” in this undated handout picture obtained March 19, 2022. Image: Beton band via Reuters

LONDON — Ukrainian punk band Beton have reworked the Clash’s famous “London Calling,” turning it into “Kyiv Calling” to highlight events in Ukraine and raise funds for a resistance movement.

The three-piece band, comprising an architect, orthopaedist and businessman, recorded their reworded take on the 1979 Clash hit in a studio in the western Ukrainian city of Lviv.

They hope it helps raise funds for the non-military operations of the Free Ukraine Resistance Movement (FURM), a publicist for FURM said, adding the Clash have agreed to donate all royalties raised to the movement’s communications department.

“Kyiv calling to the whole world… Come out of neutrality, you boys and girls,” read the new lyrics. The song is accompanied by a video of the band with clips of battle damage in Ukraine.

“Many Ukrainian musicians are now on battlefields or in territorial defence. This time they’ve changed guitars to guns,” said Beton lead singer Andriy Zholob. “We hope this song shows Ukrainians’ spirit and our defiance to Russian aggression.”

The Clash were one of the biggest bands to emerge from Britain’s punk scene in the late 1970s and had several hits, including “Should I Stay or Should I Go” and “Rock the Casbah.”

“The Clash were one of our inspirations when we fell in love with punk rock and music in general, there is no snobbery or pretentiousness to the music, they had something to say and voiced their opinions against human anger,” said Zholob.

“London Calling epitomizes all of that and we are very happy to be able to take this iconic classic and turn it into our own anthem with new meaning and life.”

Moscow refers to its actions in Ukraine as a “special operation” to weaken its neighbor’s military capabilities and root out people it calls dangerous nationalists. JB