Perhaps not known to many, but NHK WORLD-JAPAN not only covers hard-hitting news and highly polished docus—it also produces high-quality limited series, which are free to watch as video on demand (VOD) on the official NHK WORLD-JAPAN website or app. This time, a fun, quirky kind of television gem is cutting across the NHK WORLD-JAPAN content line up by way of comedy that is truly (and refreshingly) Japanese in nature, bringing in the right mix of LOLs, cringe, and ‘awww’, while surprisingly being able to put a spotlight on real-life issues—a true breath of fresh air in a pool of over-saturated Asian content. 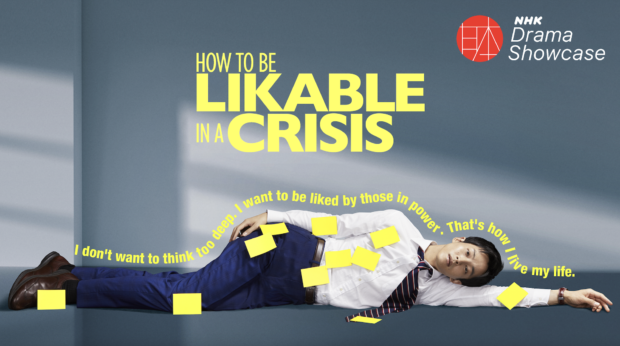 “How to be Likable in a Crisis” is a five-episode oddball comedy mini-series that stars award-winning popular Japanese actor Matsuzaka Tori (star of the 2019 Japanese film The Journalist which Netflix adapted into a series in 2022) in the lead role of Kanzaki Makoto, a bumbling 34-year-old, former broadcaster living a mediocre life, who lands a job as a public relations staff in a prestigious university. He now has the role of ensuring that the university escapes unscathed from all the public scandals that are rocking the institution. The fun begins when Kanzaki’s venture into real-time crisis management is bringing his inept self into all sorts of comedic hijinks and troubles! With all the PR nightmares unraveling one by one, Kanzaki’s adventures and misadventures in dealing with work issues make for a very captivating, highly entertaining story. The show is also curiously able to delve into societal issues, real-world problems, and personal crisis at the same time while serving comedy.

Possibly the most entertaining part of this program is the Japanese-style comedy that is deeply rooted in the program—relatable humour that is ingrained in most Japanese comedy series and can be surprisingly universally understood even by foreign audiences, and even by first time consumers of Japanese media. In episode 1 alone, the story hooks viewers immediately due to its many laugh-out-loud moments, especially in sequences where Kanzaki shows his helpless awkwardness (you can see this play out immediately in the first few minutes of the first episode).

Watch the official trailer below:

(As this is a quirky, oddball comedy, this writer recommends focusing on watching the show entirely and not multi-task on anything else, to really enjoy and digest the story, most especially if one is dependent on closed captions to understand the actors’ lines! A quick reminder as well that if you feel like some points of the program is zipping past through you, just scrub and re-watch—it’s free, no strings attached!)

Since the series is also set in modern-day Japan, it also provides a good picture of current Japanese culture and overall way of life, which adds to the interestingness of the show—the show itself harped a lot on this being a microcosm of Japan life. “How to be Likable in a Crisis” will strike most viewers as a series with a unique take to storytelling, but it is also what makes it largely interesting. It will be something that will leave an impression, one just needs to watch it wholly—FOR FREE, at that, thanks to NHK WORLD-JAPAN’s Free Video On Demand feature on their website and app.

English dubs will be made available on April 2022.

The entertainment widens on NHK

NHK’s international service NHK WORLD-JAPAN has a wide variety of content that cater to just about every kind of viewer, and drama plays a good part in their content category. One can watch the latest J-dramas on NHK Drama Showcase, which offers everything from romance, comedy, and sci-fi to gritty shows challenging social norms. As the name implies, the most common category among these series is drama, which can be seen in “To Heal the Heart,” a program that is based on true events which depicts the life of a young psychiatrist who, despite being a victim himself, compassionately cares for others who are decimated by the Great Hanshin earthquake, and “Our Rainy Days,” a hyper-specific drama about women facing difficulties surrounding menstruation. “How to be Likable in a Crisis” is part of the showcase, although NHK WORLD-JAPAN is set to release more J-dramas soon. The shows can be accessed and viewed for FREE, still on the official NHK WORLD-JAPAN website or app.

Something good for every kind of discerning viewer

Japan’s flagship broadcast station Nippon Hōsō Kyōkai or NHK (also called Japan Broadcasting Corporation) brings the best of “diversity” to its viewers around the world via the NHK WORLD-JAPAN, its international service. We can see this play out in the topics NHK WORLD-JAPAN covers, to the news team that represents it, down to shows on its programming block that cater to a wide range of audience–NHK NEWSLINE for people who want to be in touch with world issues, Pythagoras Switch for precocious kids, J-MELO for music buffs—there is just something for every kind of viewer. All it takes to see Japan in a whole new light is to download the official NHK WORLD-JAPAN app, and stream to one’s heart’s desires.