WASHINGTON – The United States has cut funding to a popular Pakistani version of the children’s program “Sesame Street” amid allegations of fraud and abuse, a US official said Tuesday. 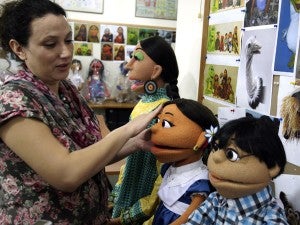 In a Oct. 13, 2011 file photo, a Pakistani artist (left) gives final touches to characters of Pakistani Sesame Street in Lahore, Pakistan. The U.S. Embassy in Pakistan says it terminated funding for a $20 million project to develop a local version of Sesame Street amid reports of corruption. AP FILE PHOTO

The program, run under the umbrella of the US-based Sesame Workshop by a local theater group, had been awarded some $20 million in funds from the US Agency for International Development (USAID).

Known as “Sim Sim Hamara” it included some of the same furry puppets beloved by children in the West such as Elmo as well as locally developed characters including Baily, a fluffy donkey who wants to be a pop star, and a crocodile, Haseen-o-Jameel, who loves words, rhymes, and songs.

But through an anti-fraud hotline set up by the US, Washington received “what we believe were credible allegations of fraud and abuse by the Rafi Peer Theater Workshop, which manages the ‘Sesame Street’ program in Pakistan,” a State Department spokesman, Mark Toner, said.

An investigation has been launched into the allegations and Rafi Peer had been sent “a letter that terminates the project agreement,” he added.

Toner refused to go into the nature of the allegations against the project, which he said had already spent some $6.7 million of its funds.

“We do acknowledge the program is beneficial. But, we had what we believe were credible allegations. So rather than to continue to throw good money after bad, we thought it was prudent to cut off this program and wait for the results of the investigation,” he told journalists.

Sesame Workshop said in a statement that it was “surprised and dismayed to learn about the serious allegations made against Rafi Peer Theatre Workshop.”

It added that it was awaiting the outcome of the investigation and did “not know the specific details of these allegations.”

“It is our hope that the achievements of Sim Sim Hamara, and the gains we have made in the lives of children in Pakistan, will carry on.”

It was the second time that a foreign version of “Sesame Street” has run into trouble after earlier problems with a Palestinian program.

“Let me be very clear that we strongly support the goal of… ‘Sesame Street’ and the Sesame Workshop worldwide,” Toner said.