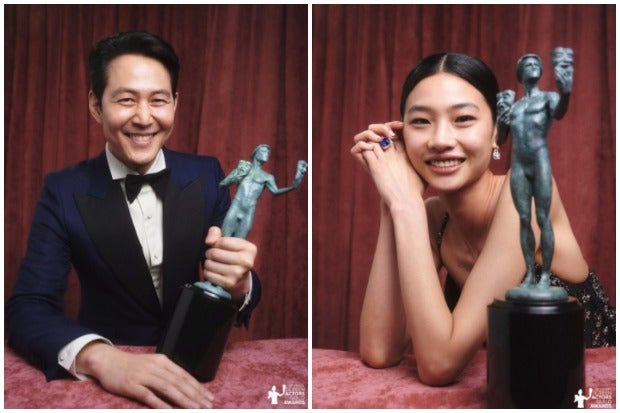 Lee Jung-jae took home the best actor award at the Screen Actors Guild Awards for his performance in Netflix’s global hit “Squid Game” on Monday. Jung Ho-yeon, who played Sae-byeok in the series, also won for outstanding performance by a female actor in a drama series

Lee was named the winner of the outstanding performance by a male actor in a drama series award for playing debt-ridden divorcee Seong Gi-hun. Billy Crudup of Apple TV+’s “The Morning Show,” as well as Brian Cox, Jeremy Strong and Kieran Culkin of HBO’s “Succession” were also nominated for the award.

Read Next
‘CODA’ lands top SAG award on road to the Oscars
EDITORS' PICK
Lawmakers eyeing more changes in Maharlika plan
Shop smarter with vivo’s big 12.12 holiday deals
How not to retire as an ex-president
The vivo Y02 is now available in the Philippines for only PHP 5,299
House energy committee chair Arroyo bats for cheap electricity
Hidilyn Diaz wins only gold missing from her collection
MOST READ
Jovit Baldivino, ‘Pilipinas Got Talent’ winner, dies at 29
LPA enters PAR, to likely strengthen into tropical depression in coming days – Pagasa
Andi Eigenmann, family in Manila for a quick visit; Ellie dines with grandma Jaclyn Jose
Lawmakers eyeing more changes in Maharlika plan
Don't miss out on the latest news and information.