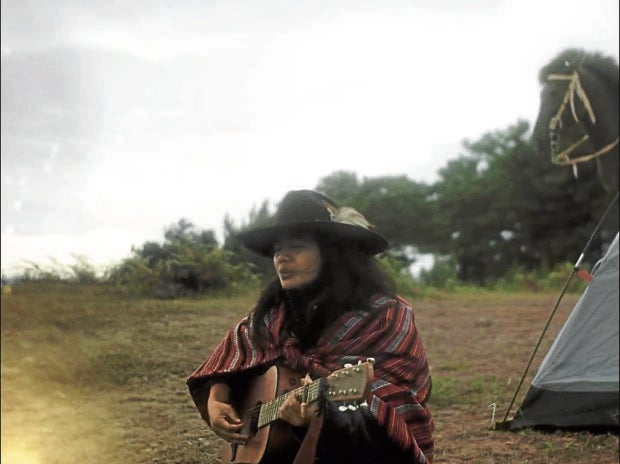 Scene from “The Headhunter’s Daughter”

For many years, stories of indigenous peoples in cinema and media were told through lenses of outsiders looking in, resulting in misrepresentation and romanticized stereotypes.

But encouragingly “indigenous cinema all over the world” is “reaching new heights.” And directors like Don Josephus Raphael Eblahan—who’s of Ifugao Igorot and Visayan descent—are now able to reclaim their stories, and present them from their own perspectives

“Telling our own stories makes them feel alive in a way that they hadn’t really been, because colonial history had always told our stories for us and portrayed us from their gaze,” Eblahan told the Inquirer in a recent interview.

Eblahan made history on January, after earning the Philippines’ first-ever win for a short film at the prestigious Sundance Film Festival. His dreamlike, elegiac drama “The Headhunter’s Daughter” competed at the annual event’s Shorts Program 4 section, and took home the Grand Jury Prize.

It also made its European premiere at the Clermont-Ferrand International Short Film Festival in France earlier this month.

“As indigenous filmmakers—especially the young ones—now create a whole new cultural, cinematic landscape, there springs forth a new generation of self-reclamation and unique sense of revolution: taking our own stories, and telling them in our own unique selves, no matter how complex, deep, or simple it may be. They now feel ours,” the 25-year-old filmmaker said.

Shot amid pandemic restrictions, “The Headhunter’s Daughter” is about an aspiring country music artist from the Cordillera region named Lynn (Ammin Acha-ur), who sets off on horseback to the bustling Baguio City, where she tries out for a singing contest on television.

Described as having an “entrancing” and “poetic” vibe, the film was lauded by a Sundance juror for its “gorgeous cinematography, direction and acting,” which helped “capture a unique sense of place.”

“‘The Headhunter’s Daughter’ was inspired by young dreams of becoming a musician, and attempts of spiritually reaching my father who passed away when I was young. It’s also an ode to my personal relationship with my Igorot identity,” he said.Eblahan, who studied film at the DePaul University in Chicago, United States, hoped that his movie can help draw attention to “Igorot stories and identities,” which inform and influence his vision as a filmmaker.

“Branding myself of my regional roots draws attention to the multicultural and complex essence of the Philippine identity. For me, it’s important to be known as such, as it establishes a cultural lens as to when audiences view our films,” he said. “This way, the personal stories I craft are viewed with the context of geography and history, and with a more open approach in understanding the narrative.”

While Sundance initially planned to resume in-person activities and screenings this year, the surge of the coronavirus’ Omicron variant forced the event to revert to online means for the second year in the row. But it was an understandable and responsible decision to make, said Eblahan.

“We were on our toes, sort of expecting what kind of news would come out about the Omicron surge, and hoping the best for all the festival organizers and programmers around the world … Other festivals were starting to switch to online, which we were afraid would happen to Sundance. But I believe it was the safest and wisest choice to make,” he said.

After “The Headhunter’s Daugther’s” Sundance run, Eblahan said he’s looking forward to more screenings around the world, including the Philippines, of course.

“We’re still fresh in the festival circuit for the film, so we’re expecting more premieres in different regions around the world. But of course, we’re looking forward to a local premiere—most importantly, a Northern Luzon premiere, as a way to honor the land we shot our film in,” he related. Aside from “The Headhunter’s Daughter,” Eblahan’s earlier short films have also been showcased and won in various festivals overseas: “Umbilical Cord to Heaven” won the best experimental award at the National Film Festival for the Talented Youth in Washington, United States (2019), and competed at the Ann Arbor Film Festival in Michigan, United States (2020).

And Eblahan is only getting started. Asked what people expect from in the near future, he said there are more projects to come, including one whose concept revolves around nature as the driving force of the narrative and character development.“I have made films in which nature—and connected to it—is calling for the protagonist. It would be interesting to push that boundary,” he said. “But what if all of a sudden, ‘nature’ becomes the main entity that grinds the limits of our characters to the point of bending one’s patience and soul, from a distance of from within?” he related.