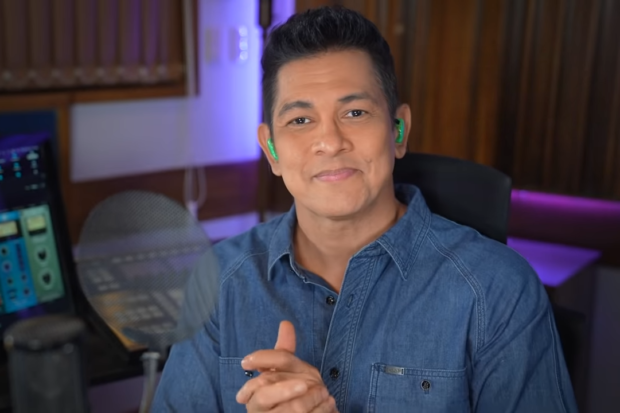 Gary Valenciano has admitted to being a first-time voter in the upcoming May 2022 polls as he told the public that he wants to see leaders who put themselves “in the palm of the Lord.”

The singer, 57, made this revelation during the proclamation rally of presidential candidate Vice President Leni Robredo and vice-presidential bet Sen. Kiko Pangilinan yesterday, as seen on the vice president’s Facebook page yesterday, Feb. 8.

“Ito ang magiging first time ko (This will be my first time) to vote ever and I know I’m going to make the right vote,” he said.

Valenciano is Pangilinan’s brother-in-law. He attended the campaign event virtually along with actresses Iza Calzado and Jolina Magdangal, among others.

Valenciano added that he believes a public servant who puts faith in God can help Filipinos.

“Naniniwala ako na (I believe that) if you put yourself in the palm of the Lord, he brings you up. And if that happens, kaya niyong iangat ang buhay ng bawat Filipino (you can lift up the lives or every Filipino),” he stressed.

After disclosing that he is a first-time voter, Valenciano received praise from netizens on Twitter who said it is never too late to cast one’s ballot.

“Gary V is a first-time voter! It’s never too late to make your voice count,” one @anjpessumal said.

Gary V is a first-time voter! It's never too late to make your voice count 💓

Another netizen, @aahnesty, laid down the lyrics to Valenciano’s song “Take Me Out of the Dark” as he noted that the coming elections are “crucial.”

(Mr. Gary V is campaigning for the first time. That means the 2022 election is so crucial and he now needs to sing… “Take me out of the dark, my Lord, I don’t wanna be there.”)

"Take me out of the dark, my Lord, I don't wanna be there."#KulayRosasAngBukas https://t.co/BSU5AvbFIz pic.twitter.com/AOOXNTfXne

“Gary V just came out as a first time voter [laughing my ass off], it’s THAT bad,” one @aieos, meanwhile, said.