Jumping from stage to screen: The plays on film-theater luminaries’ wish list 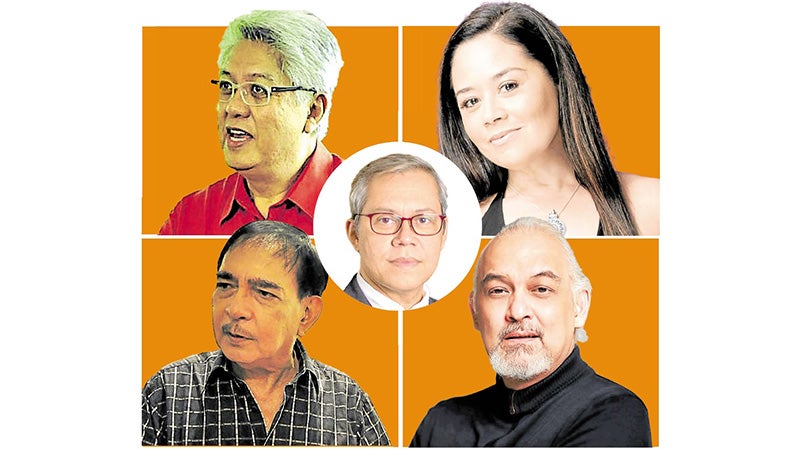 The ongoing pandemic has robbed many viewers of the fully immersive experience of watching live entertainment in the theater, acclimatizing us to the “new normal” of watching shows and movies online through streaming services. The country’s live performance industry certainly has a lot of catching up to do compared to its western counterparts.

Case in point is “Pass Over.” This modern take on Samuel Beckett’s “Waiting for Godot,” which opened to sold-out audiences last August, was the first play to end Broadway’s 17-month hiatus because of the coronavirus.

Mulling over seemingly endless challenges presented by the current climate, I prefer to digress and look at the myriad of creative ideas just waiting to be realized. We asked some of the country’s most distinguished personalities in the film and theater industries to share with us their dream stage-to-film adaptations, their thoughts on jukebox musicals and reviving the live performance industry.

For his part, seasoned theater actor-director Michael Williams, who has over 100 roles to his credit, wants to see a Bafta (British Academy of Film and Television Arts)-winning film turned into a theater production.

“The 1991 movie ‘The Commitments’ is a comedy-drama about a young music fanatic who puts out an ad in the papers for singers to form a soul band. But all the applicants turn out to be ‘unsuitable’ (to put it kindly). The film follows him through his trials and tribulations to get his band to take off. I think this would be a great theater musical.”

Its featured songs include “Mustang Sally,” “Chain of Fools” and the anthemic hit “Try a Little Tenderness.”

Actress, activist, drama teacher and One Billion Rising global director Monique Wilson’s choices shine the spotlight on women empowerment and underscore the need to talk about the issues we face today.

“I love the plays of Federico Garcia Lorca, particularly ‘Blood Wedding’ and ‘Yerma,’” Monique said. “Lorca’s productions often have strong women characters, but he also wrote about women’s oppression and struggle for liberation. These have been adapted into ballets which were then filmed, but I would love to see a dramatized version of them on film.

“The reason I would choose him and these plays, in particular, is that Lorca’s work is not ‘realist’—it’s more surrealist—and can even venture more into the style of magic realism or even ‘fantasy.’”

“I am imagining film versions of these plays would feel very much like in the realm of Guillermo del Toro’s “Pan’s Labyrinth,” for example—which would be exciting to watch cinematically. I would also love for Caryl Churchill’s play ‘A Mouthful of Birds’ to be adapted into film. Again, it is strongly feminist—it uncovers many layers of gender—but it also breaks convention in terms of the usual ‘realism’ style.”

On the other hand, National Artist for Music Ryan Cayabyab aka Mr. C, who has written glorious music for some of the country’s best theater productions, names a delectable lineup of Filipino musicals that he’d love to see adapted for the big screen.

“‘Ang Huling El Bimbo’ would make for a great film adaptation,” Cayabyab said. “Together with ‘Eto Na! Musical nAPO!,’ which features the song of Apo Hiking Society, and ‘Rak of Aegis,’ they would make a good trilogy of period pieces depicting the urban Filipino landscape in various decades, premillennium.

“I would also like to nominate the trilogy of ‘Noli Me Tangere,’ ‘El Filibusterismo’ and ‘Ilustrado,’ staged by Tanghalang Pilipino, to be adapted for film. The cultural, literary and historical values of the content of these musicals are timeless and beyond reproach.“As a play adapted for film, I nominate Floy Quintos’ ‘The Angry Christ.’ It would look gorgeous on film if done well.”

“William Shakespeare’s ‘A Midsummer Night’s Dream’ and ‘The Tempest’ might make good plots for adaptation into Filipino settings. Both have elements of fantasy, engaging love stories, humor and not too complex plots that work well for musicals. In fact, when one thinks about it, it’s surprising that no one has attempted to do them yet.

“Here in the Philippines one play that comes to mind is Severino Montano’s ‘The Merry Wives of Manila,’ but written in Tagalog. It’s light—frothy, even—and quite funny.”

Legendary stage and film actor Tommy Abuel would like to see an award-winning book adapted into the silver screen to pay homage to octogenarian war veterans.

“The play that I would like to be made into film is ‘Mga Gerilya sa Powell Street,’ about World War II veterans, who are waiting in the United States for the war benefits promised to Filipino soldiers by the US government.

“The play shows how unfairly the veterans were treated by the US government. It’s pathetic—and truly heartbreaking.”

Our Q&A with them:

Jukebox musicals like “Mamma Mia,” “Jagged Little Pill” and “Rock of Ages” are very popular. Whose songs would you like to get adapted for the stage or on-screen?

Michael: The story of The New Minstrels, but all the actors have to be very good singers!

Mr. C: The following songwriters’ body of works should be adapted or incorporated into musicals, but should be done really well: George Canseco and Willy Cruz.

Don’t forget the musical bio of Pilita Corrales. Her professional career has spanned decades, and we have much to learn about how someone like her still commands standing ovations from the audience. We could also look into bio sketches of the male singers of the ‘70s: Rico J. Puno, Hajji Alejandro and Basil Valdez, wherein their hit songs will figure well in the play.

This can be expanded into character sketches of well-loved male performers from different generations—there’s Diomedes Maturan, Ric Manrique, The Reycards, Victor Wood, Eddie Peregrina, and all the way to Gary V. and Martin Nievera. They would all be impersonations with their matching singing styles. It should be fun, but they have to be written well.

Monique: Maybe not one particular singer or artists— but maybe more a collection of amazing women empowerment songs by the likes of Annie Lennox, for example. It shouldn’t feel limited to whatever one can create from just one artist. Some musicals have worked this way, but others haven’t—because it can tend to become trite and forced.

Leo: The musical is a different genre and so the music has to be written to fit that genre. It will take a lot of skill and craft to carve out plots from material that is static and basically inert, story-wise. After all, pop songs were not written for this genre.

The songs in a musical are always written to further a plot, simply because the book writers and lyricists of musicals have much less time (on the average, two and a half hours) for character and story development—that is, compared to straight plays.

However, in the theater, because the characters are led through a gamut of emotions and situations, the music and lyrics have to cue its audience on the “intention” of the scene and how the song relates to the plot.

Having said that, we’ve had a couple of jukebox musicals, like “Rak of Aegis” and “Eto Na! Musical nAPO,” that have done well. Of the ones I know, the lyrics of Jose Mari Chan and Ryan Cayabyab, as well as Florante, may work in musicals as these sometimes sketch out a plotline. INQ