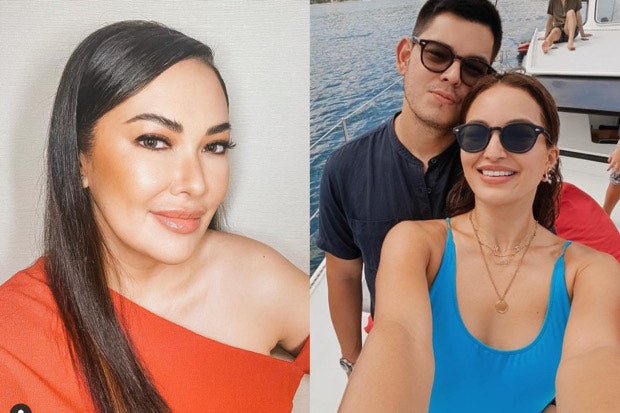 Ruffa Gutierrez is seemingly looking forward to an addition in the Gutierrez family, as she teased her sister-in-law, actress Sarah Lahbati and brother Richard Gutierrez to go for a third baby.

Ruffa’s remark came after Lahbati showed a video of herself and Richard in a resort in Palawan, on her Instagram page on Monday, Jan. 24.

Richard can be seen immersed and leaning at the edge of the pool while Lahbati swam towards him. The couple hugged and kissed each other, then looked out to the sea.

Ruffa then left a comment, which teasingly urges the couple to have another child.

“Woohoooo!! Helloo baby number [three]!” she said, to which Sarah replied with a laughing and angel emoji.

Lahbati and Richard got married in March 2020, after being engaged for three years. They have two sons together, Zion and Kai. JB

Read Next
Beatles and John Lennon items to be made available as NFTs
EDITORS' PICK
‘Weak surge’ in COVID cases over in 2 weeks, says Octa
Lawmakers seek revival of PH history as separate subject
High-risk pregnancy: Reducing your risk is in your hands
House energy committee chair Arroyo bats for cheap electricity
Geek out at TOYCON 2022 powered by Smart Signature
Bongbong Marcos holds first Cabinet meeting
MOST READ
Don't miss out on the latest news and information.