MANILA, Philippines—This show biz star went to Camp Crame not to promote a movie or TV show but to talk about earthquakes and typhoons. 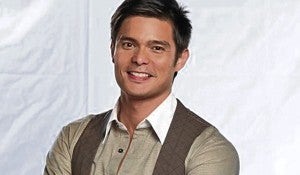 Movie and television actor Dingdong Dantes on Thursday helped launch a nationwide campaign to raise awareness on disaster preparedness among the youth at an elementary school located within Camp Crame, headquarters of the Philippine National Police.

He said young people were often rendered helpless during disasters, thus the need to improve their “physical, emotional and psychological capacity to face natural calamities brought about by the disastrous onslaughts of climate change.”

Dantes cited figures from the United Nations International Strategy for Disaster Reduction showing that “for every 10 persons displaced by disaster, four to five of them are children or youth.”

“What future shall we speak of when our bearers of tomorrow are being decimated without them even having the chance to intelligently defend themselves?” he said in a speech at the Camp Crame Elementary School.

In cooperation with the National Youth Commission (NYC), the YPF’s aim is to train communities through the “Para-Paaralan para sa Kahandaan” program on safety measures they can take during calamities.

The YPF has already trained some 10,000 people, mostly students in cities and towns around Metro Manila and the southern and central Luzon areas, he said.

“There is no future we can talk about when we cannot defend, or at least make our young people prepare through awareness, against the onslaughts of disasters. Our local governments should also give equal emphasis to this important task, among others,” Dantes said.

Robredo said the YPF and the NYF would boost the Department of the Interior and Local Government’s own regional “Tapatan Caravan for Disaster Preparedness,” which was advancing a similar cause.

The official said more attention must be paid the youth in disaster response.

“We prepare not for ourselves but for them, and what better preparedness than to have the young preparing themselves?” Robredo said.

He lauded Dantes for “his unselfishness and volunteerism for a great crusade,” adding that the actor would act as the DILG’s “youth mobilizer,” inspiration and icon for the government’s disaster preparedness drive.

“In key select sorties or road shows on the DILG’s regional disaster preparedness campaign, Dingdong has agreed to join in the campaign by actively taking part in the training program with the LGUs,” Robredo said.

He added that Dantes’ popularity with the youth would go a long way in “maximizing the power of mass communications to reach as many stakeholders as possible.”

At the launch, Robredo, Dantes and Undersecretary Leon G. Flores III of the NYC signed a memorandum of understanding, defining each of their roles in the project.