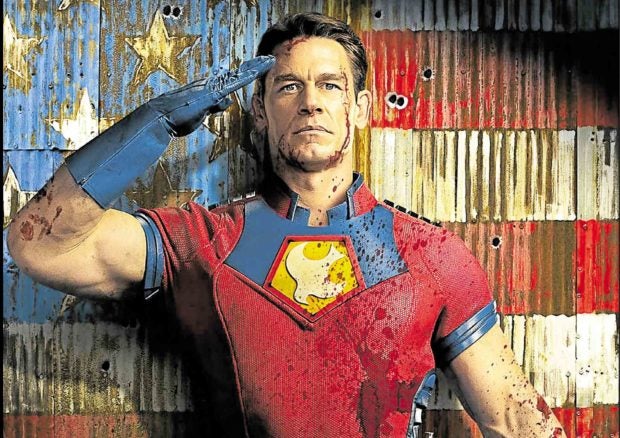 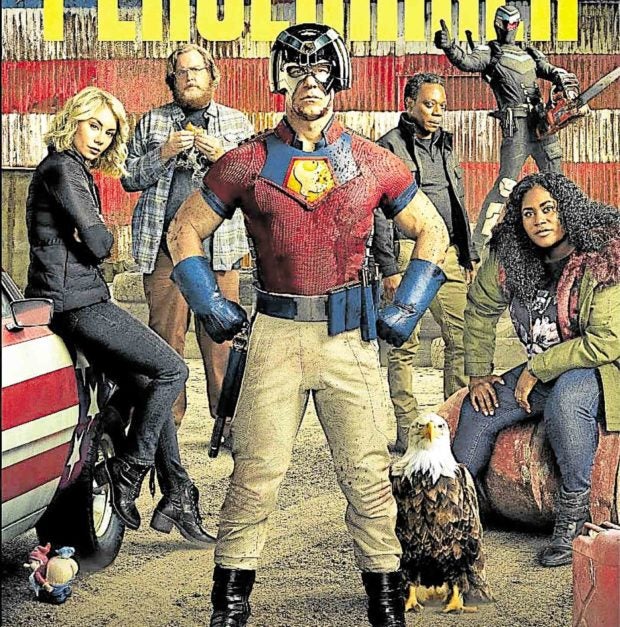 If you had a blast getting immersed in the idiosyncratic world of superheroes cleverly realized by director James Gunn in 2014’s “Guardians of the Galaxy” or 2010’s “Super,” then turning the Suicide Squad’s fortunes around shouldn’t have come as a surprise.

After all, going from the 2016 version’s dismal 26-percent approval rating to the 2021 film’s astonishing 90-percent rating on Rotten Tomatoes was no mean feat.

In HBO’s “Peacemaker,” the much-ballyhooed TV spinoff (also 90 percent of Rotten Tomatoes) focusing on Peacemaker aka Christopher Smith (John Cena, self-deprecatingly winsome in the title role) that launches its eight-episode run on HBO Go tomorrow, there’s as much raunchy humor as loopy antics in Gunn’s latest excursion into the world of ruthless villains-turned-superheroes.

“Peacemaker” takes place not long after Chris (John) is brought back to life in one of the end-credit scenes of “The Suicide Squad.” Thereafter, he grudgingly joins a quirky new group of operatives from A.R.G.U.S. (Advanced Research Group United Support) tasked to save the world from mysterious “butterflies” that can control the mind of its victims.

This time around, the spinoff digs deep into Chris’ backstory to explain how his masked alter ego Peacemaker ended up becoming a ruthless, jingoistic killer who believes in achieving peace “at any cost.”

Gunn describes Peacemaker as a “superhero/supervillain who is the world’s biggest douchebag,” but he manages to clarify where Peacemaker’s demons are coming from, not the least of which emanates from Chris’ abusive, white supremacist father Auggie Smith, portrayed to sinister perfection by Robert Patrick.

After the events in “The Suicide Squad,” where Peacemaker kills Rick Flag (Joel Kinnaman) during a fight, the show tries to “recalibrate” the public’s perception of Peacemaker by way of explaining his troubled past.

“‘The Suicide Squad’ in itself is a mission that’s tip to tail, and it follows the journey of the team on that mission,” said John Cena, who was paired with Jennifer Holland when we spoke to him and the other members of the cast last Sunday. “The series revolves around Peacemaker during an objective and the times in between.

“We see Chris doing human things, like that clip that shows him in a restaurant wearing his uniform with his helmet on, and how he thinks that that’s normal. But that’s only his perception, not necessarily everybody’s reality. It’s moments like that where we can take a closer look at Peacemaker and his human side. His reality may not seem to line up with reality in general.” 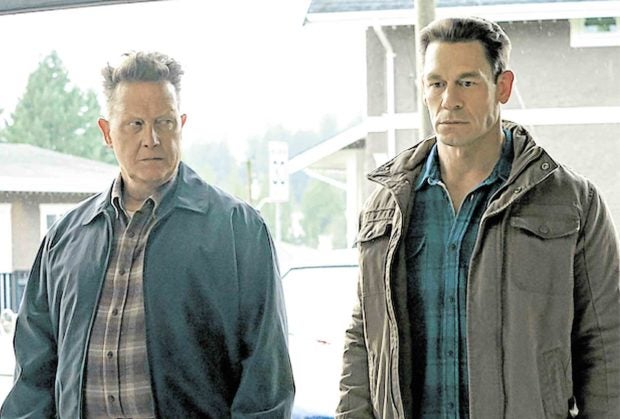 The fast-paced series is as funny as it is action-packed, and owes much of its off-kilter humor and smartly staged raunch to Gunn’s no-holds-barred political incorrectness.

Meanwhile, the insults heard in the show are sometimes as silly as they’re downright racist, and the violence that ensues often leads to a lot of nasty, naughty mess—moments of levity that take the edge off its gruesome gore and make the series as compelling as the actors’ portrayals of their hilarious characters.

Moreover, it also provides scenes of intimacy that show its characters at their most vulnerable state—like when Peacemaker expresses tear-drenched elation after he gets Eagley, his pet eagle, to hug him!

Our Q&A with John:

“Peacemaker” is your more in-depth work as an actor. We see you dancing in your underwear, killing people, going crazy with yourself while hearing voices, etc. What surprised you about yourself in terms of performance skills you didn’t know you had?

I hope everybody enjoys the series as much as you did. You know, it’s like when you’re in an activity where you don’t necessarily realize what’s going on until after you do it. Athletes call it being “in the zone.” Sports psychologists refer to it as “flow.”

I was surprised that everybody in the cast was a well-oiled machine. They all knew who they were and brought their A game to the table—we didn’t have weak links! And I think that’s when you get not just an all-star player, but also an all-star team to get everybody “in the zone.”

This created an environment where we could all take risks, and nobody was looked down upon for taking chances or trying out something new.

Where did you get the inspiration for your character?

The inspiration certainly comes from James’ creativity. He’s a very gifted writer. When you read a piece of his work, you instantly notice that he paints such a clear picture of that character and the situation he’s in—you see exactly what’s in front of you.

Then, you’re allowed to bring your nuance and create your own depth of field. When it comes to character choices, it all comes down to a series of questions, like “Do I see a bit of myself in the conflict the Peacemaker is going through?” Or “Do I see myself in how socially awkward he is?” These are small questions you could ask yourself while figuring out your character. Ultimately, you’ll find the inspiration in the material itself.

What did you do to convincingly act with an animal that isn’t there?

Because the scene truly looked sincere. First of all, Eagly is great. I couldn’t ask for a better sidekick—he is a scene-stealer every time he shows up! To answer your question, we’re in the imagination business. Given the great things that CGI can do, if we’re brave enough to use our imagination “in the moment,” it wouldn’t be so hard to think of a bowling pin-shaped, gray memory-foam to be a real eagle.

It’s no different from my experience in “Bumblebee,” where I had to imagine Bumblebee while acting with a 13-foot broomstick with a tennis ball on the top of it. I love those moments where I can make the world whatever I want it to be. And then, when the finished product comes, you see that you’re actually being hugged by an eagle!

In what way will “Peacemaker” expand the DC Universe?

My expectations are that audiences around the world will be entertained by “Peacemaker”—that’s absolutely step one. Whatever audiences take away from it, it looks like we’re in a good place because reviewers like you and the people who have already seen the show are heavily engaged by it. Everybody seems to have a perspective on what they’ve seen, which is really fun.

But I have no idea about its potential to expand beyond where it is. I don’t make those kinds of decisions. I am a lowly pawn on the chessboard, with a chrome helmet (laughs). I loved working with James and the crew, and if they want to do eight more seasons, I would gladly wear the costume again.

Did you and Dwayne Johnson have a chat about the possibility of starting a battle between Peacemaker and Black Adam? Which DC superhero you would like to fight with, because Christopher had some very serious issues against the Batman?

Dwayne and I had a very in-depth conversation in a bunker 40 floors beneath the surface about the potential of the DC Universe. And this involves an elaborate plan between the two of us to get Black Adam and Peacemaker to eventually collide in a two-and-a-half-minute squash match, where Black Adam totally destroys Peacemaker.

But, all of that is absolutely false (laughs). That’s just some great clickbait headline for you. The truth is, I didn’t think there would be a “Peacemaker” series at all. If you watch “The Suicide Squad,” Peacemaker isn’t even supposed to survive!

So, I’m just glad he made it through. Peacemaker is so jealous of every superhero because they are “real” superheroes. They’re super virtuous who stand for what’s good. Meanwhile, Peacemaker is just a guy in a uniform with a great set of skills. He does some really nefarious things, so he does not really qualify as a superhero.

For the future of the DC Universe, it’s important to set up the question of “What is super heroic?” Or “How much virtue do you need to have to fall into that category?” With those blacks and whites in place, is there space for those who fall under gray? INQ