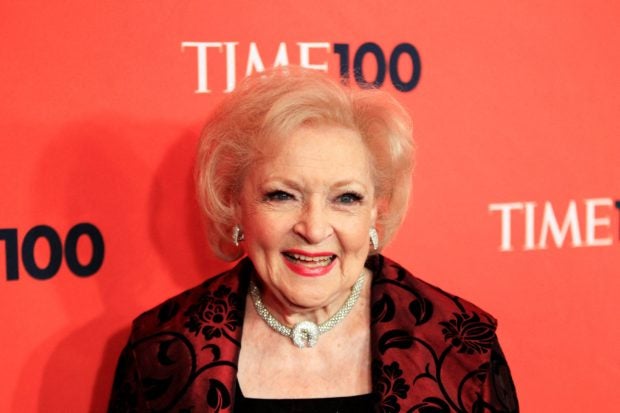 Actress Betty White arrives as a guest for the Time Magazine’s 100 Most Influential People in the World gala in New York May 4, 2010. Image: Reuters/Lucas Jackson

LOS ANGELES — The cause of actress Betty White’s death on New Year’s Eve, at age 99, was a stroke she had suffered nearly a week earlier, a copy of the performer’s death certificate posted online by TMZ on Monday showed.

The partially redacted certificate stated White’s cause of death as a “cerebrovascular accident,” a medical term for a stroke or the loss of blood flow to the brain caused by a clot or ruptured blood vessels, resulting in brain tissue damage.

According to the document, issued by the Los Angeles County Department of Public Health, the stroke occurred six days prior to White’s death. The health agency and the county Registrar-Recorder/County Clerk’s office, where vital records are kept, both declined to comment.

Jeff Witjas, White’s longtime agent, said in a statement: “Betty passed in her sleep peacefully without pain. To me this is the most important thing and brings me comfort as her dear friend. Anything else is private to Betty.”

TMZ cited unnamed sources as saying White had remained alert and coherent following her stroke, before dying in her sleep at home.

White, who remained a pop culture phenomenon well into her 90s, long after Emmy-winning roles on television sitcoms “The Golden Girls” and “The Mary Tyler Moore Show,” died on Dec. 31 less than three weeks shy of her 100th birthday.

Playing on her eminent likability and slightly naughty wit as America’s geriatric sweetheart, White was still starring in a television comedy, “Hot in Cleveland,” at age 92 until it was canceled in late 2014.

Betty White, last of ‘The Golden Girls,’ has the last laugh in biographic comic book