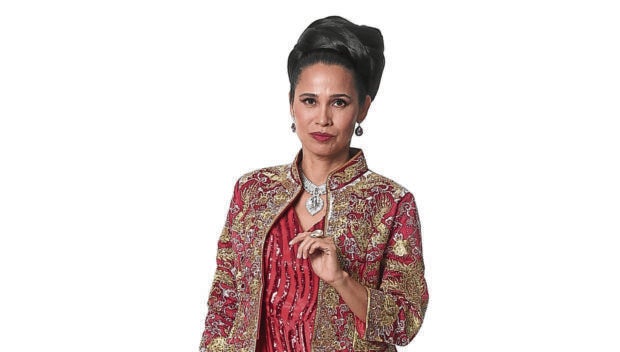 Maricel Laxa never thought that she would still be active in show biz at this point in her life. But after spending the last 10 years away from the limelight, she finds herself back to the teleserye grind. And it’s all thanks to her actor son, Donny Pangilinan.

“Kagagawan ni Donny ‘to!” she said in a recent Zoom conference for the first installment of “Mano Po Legacy”—the television drama anthology adaptation of Regal Entertainment’s popular film franchise of the same title. It’s a coproduction with GMA 7, where the show will air weeknights starting Jan. 3.

“I didn’t expect that show biz projects would still be coming my way now. This wasn’t what I had been imagining,” she said.

The Urian- and Famas-winning actress feels content, and would have been more than happy watching her five kids chase after their dreams from the sidelines. “I was just happy being able to support my children with what they do on and offscreen,” she said. “But Donny would always insist that I accept the acting offers.”

Eventually, she realized that she couldn’t always keep the actress in her just locked up.

“I can’t blame my kids for pushing me to act again because the projects being presented to me were all good—it wouldn’t be right to turn them all down and say no. When acting and show biz are in your veins, your blood rushes when a role that you feel is right for you comes along.”

Titled “The Family Fortune,” the eight-week debut offering of “Mano Po Legacy” starts with the unexpected death of a business tycoon and leader of the Chan family, one of the most prominent in the Filipino-Chinese community. The void he leaves behind has power-thirsty descendants and heirs scrambling to stake their claim on the clan’s fortunes, and wrestling for control over the conglomerate.

Leading the cast is Barbie Forteza, who plays Steffy Dy, a young woman of humble background who lands a scholarship in one of the Chan family’s foundations. She then works as a secretary to the intelligent Cristine Chan (Sunshine Cruz)—a key figure behind the empire’s success. Maricel, on the other hand, plays Valerie, the manipulative common-law wife of Cristine’s brother.

“I’m so happy because things have shifted. It used to be me being supportive of my children. But now, they’re super supportive of what I do,” said Maricel, who has four other children—Ella, Hannah, Benjamin and Solana—with her husband, Anthony Pangilinan.

The 51-year-old artist, who starred in the TV5 soap “Paano ang Pangako” earlier this year, said her return to acting will give her new things to share with her children.

“One time, my son Benjamin said, ‘I want to see what you do on the set. Can I observe?,’” she said. “I feel touched because I’ll have something new to show to my children. They’ll discover a part of my life that they weren’t aware of.”

Starring in a GMA 7 and Regal production feels like a homecoming of sorts for Maricel, whose stint in “GMA Supershow” in the 1990s led to her discovery by Mother Lily Monteverde. INQ