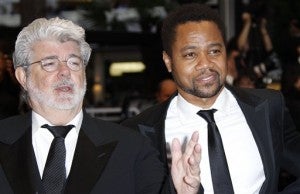 Director George Lucas, left, and actor Cuba Gooding Jr. arrive for the screening of Cosmopolis at the 65th international film festival, in Cannes, southern France, Friday, May 25, 2012. Lucas has dismissed claims he is waging "class warfare" by selling some of his land for low-income housing, after rich neighbors nixed plans for new studio space. AP PHOTO/JOEL RYAN

LOS ANGELES—”Star Wars” director George Lucas has dismissed claims he is waging “class warfare” by selling some of his land for low-income housing, after rich neighbors nixed plans for new studio space.

In the latest twist in a long-running battle, the legendary filmmaker lamented that some locals near his Skywalker Ranch complex outside San Francisco had misrepresented him as running an “evil empire.”

Lucas claims the planned new addition to his studio based in a secluded valley in Marin County would have provided good jobs for local people, and not had any significant extra environmental impact on the well-to-do area.

But he withdrew the planning application last month after it appeared that neighbors’ complaints would delay the project indefinitely – and decided instead to offer the land for development of affordable housing.

That triggered a new round of protest from some in the well-heeled community, including a reported comment from Carolyn Lenert, head of the North San Rafael Coalition of Residents, that he was “inciting class warfare.”

Lucasfilm, the studio behind the “Star Wars” and “Indiana Jones” movie franchises, rejected the charge.

“That’s what’s needed in Marin County, without a question,” he told AFP.

In the years that followed, he gradually expanded the company, but was careful to ensure the growing studio complex remained discreetly nestled behind trees, maintaining a low profile – and keeping his valley neighbors happy.

But relations began to fray with plans for a new facility to be called Grady Ranch, which would include a large studio space, an outdoor sound stage and underground parking.

And tensions came to a head last month when, after the latest bureaucratic and legal delay, Lucas announced in an emotionally worded letter that he was canceling the plans – and turning the land over to low-income housing.

“The level of bitterness and anger expressed by the homeowners in Lucas Valley has convinced us that, even if we were to spend more time … we would not be able to maintain a constructive relationship with our neighbors.

“We love working and living in Marin, but the residents of Lucas Valley have fought this project for 25 years, and enough is enough.”

Recalling his arrival in the valley, he said: “When we first proposed Skywalker Ranch in 1978, we understood people’s concerns about a business moving to a residential area.

“They feared helicopters landing with celebrities and tour buses coming down Lucas Valley Road. None of their fears materialized,” he said, noting hiking trails, buildings hidden from the road and other measures to preserve wildlife.

But, he said, attempts to find acceptable compromises for Grady Ranch had failed. “We are not a real estate developer. We need the spaces we build to do our work. Movies are waiting to be made, and we must move forward.

“Unfortunately, the projects we had planned to shoot on those stages have already started production and we will need the studio space by early 2013.

“We have several opportunities to build the production stages in communities that see us as a creative asset, not as an evil empire, and if we are to stay on schedule we must act on those opportunities.”

Spearheading opposition to the Grady Ranch was the Lucas Valley Estates Homeowners’ Association, which critics accused of being “eco-activists” and “NIMBYs” (Not In My Back Yard).

“These comments are unfortunate,” the association says on its website, defending itself against such charges.

“All citizens and neighborhoods have the right to submit comments or request reviews on developments that significantly impact their immediate environment. This is a normal and standard process,” it said.

In an e-mail to AFP, the association said it had “no regrets” about having opposed the Grady Ranch to the point where it was dropped, adding that it had never discussed the project directly with the filmmaker or his company.

“There has been no communication from George Lucas personally nor Lucasfilm directly,” it said.

Tensions between those who backed the new studio project and those who opposed it have been exacerbated by Lucas’ unexpected decision to turn it over to affordable housing.

Lucas himself, in an e-mail to the New York Times, said he only wanted to do something good for Marin.

“I’ve been surprised to see some people characterize this as vindictive,” he said, adding that there was a “real need” for affordable housing here.

“I wouldn’t waste my time or money just to try to upset the neighbors,” he said.

The Lucasfilm spokesman, Perkins, said the company wanted to move on from the long-running dispute.

“If we can identify a developer, which I’m pretty confident that we will, then it will change hands, and they will develop it as low-income housing,” he said. “We’re not building Grady Ranch… We plan on selling the property.”

“It’s been going on for a long time, and from our perspective we’re kind of done,” he added.