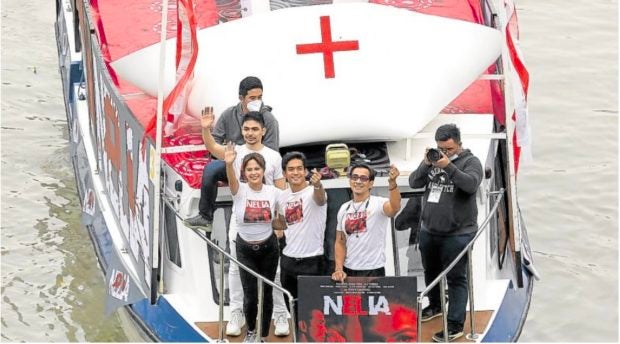 MANILA, Philippines — For the first time in its history, the Metro Manila Film Festival’s (MMFF) kickoff event, the Parade of Stars, was held not on the city’s bustling streets, but on the waters of Pasig River on Sunday afternoon.

Because of the COVID-19 pandemic, the MMFF screened last year’s entries using online streaming platforms and forewent the parade altogether. But as the annual showbiz event returns to the cinemas amid the easing of restrictions, organizers hoped that the fluvial parade could help generate buzz and reassure moviegoers.

“We did it … The film industry has been badly affected for almost years. Some of these films were shot during the pandemic, without knowing if the cinemas would reopen or not. They invested in the middle of the pandemic. These films make us laugh or cry. And by watching them, we see our culture and soul as Filipinos,” said Benhur Abalos, chair of the Metro Manila Development Authority, and MMFF. 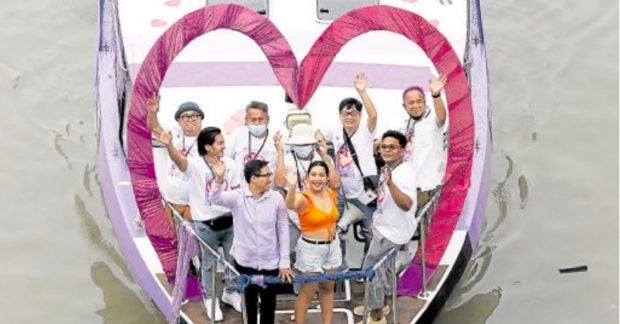 Unlike the previous parades’ extravagant and eye-catching floats, this year’s had relatively simpler designs with some entries just opting to deck their ferry with film posters. But there were some standouts like that of the horror flick “Huwag Kang Lalabas,” which looked like a sinister graveyard; and the medical-themed thriller “Nelia,” which featured a nurse hat and giant syringes.

Despite the rainy weather, fans flocked to the banks of Pasig River near Guadalupe ferry station, the parade’s starting point. At around 2:30 p.m., the floats moved eastward toward Bagong Ilog Bridge in Pasig City, before making a U-turn and heading for Circuit Event Grounds in Makati City, where a variety show was held.

While some of the stars skipped the parade and went straight to the culminating event, others couldn’t be more excited to ride the floats. Ken Chan and Rita Daniela of the movie “Huling Ulan sa Tag-Araw” said they came ready for the rain.

“We wanted to do this rain or shine. I even brought an umbrella,” Daniela told the Inquirer.

“We don’t mind getting wet. We still want to push through with it because I have been waiting for this chance for a long time,” Chan said, adding that taking part in the parade was one of his childhood dreams.

“When I was a kid, I would visit my neighbors, my ninongs and ninangs for pamasko. I would have around P1,300 at the end of the day, and I would often use the money to watch MMFF movies at malls … I watched the parade on television, because the floats were always amazing,” he said. “I used to dream that I would be here one day. And this time, I did it!”

Christian Bables of the war on drugs-themed black comedy “Big Night!” first participated in the parade in 2016, as part of the supporting cast of the film “Die Beautiful.” This time, he returns as the lead star.

“I’m happy because the MMFF jump-started my career. I remember being so excited riding our float a few years ago. Now, I’m doing it again—but it’s me on the poster,” he said. “I’m glad they found a way to hold the parade, which is one of the highlights of the festival.”

Winwyn Marquez couldn’t make it to the float of her debut starring movie, the psychological thriller “Nelia.” She revealed the day before that she’s 21 weeks pregnant and was advised not to overexert herself.

Her coactors, Lloyd Samartino and Raymond Bagatsing, on the other hand, are hopeful that this year’s parade and festival can help reinvigorate the film industry, which has been badly hit by the pandemic and the resulting production restrictions.

“I pray that this is a sign that the movie industry will soon regain its energy, especially now that we really need entertainment. We actors have been itching to act again, or do different roles,” Samartino said.

“It’s an exciting and inspiring time,” Bagatsing added. “I really missed going to the cinemas; it’s my stress reliever. I’m glad with what’s happening now in the industry. I’m excited for the directors, producers and my fellow actors.”

James Blanco of “Huwag Kang Lalabas,” meanwhile, was admittedly a little nervous about doing the parade on a river. But that didn’t dampen his excitement. “It has been a while since I last took part in the MMFF. And I’m very happy to see the fans, because we owe a lot to them,” he said. “I’m grateful because despite the pandemic, we’re still given this chance to see them.”

Though he’s thrilled about the parade and the return of the MMFF to the theaters, award-winning actor John Arcilla — star of the Filipino adaptation of the South Korean action thriller “A Hard Day” — reminded the fans and fellow actors to not let their guard down when it comes to safety precautions.

“I’m 100-percent excited, not just for actors like me, but for the audiences. Of course, we don’t want to dampen the excitement with paranoia, but let’s continue being cautious,” he said. “We still have to be careful.”