RABAT, Morocco — Morocco’s glittering Mawazine international music festival wraps up this weekend with performances by Mariah Carey and Lenny Kravitz, after nine days of showcasing the North African kingdom’s cool factor — even as dissident Moroccan musicians are imprisoned for their anti-establishment lyrics. 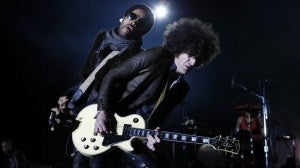 The 11-year-old “Rhythms of the World” festival in the capital Rabat has always highlighted Morocco’s contradictions as the country spends millions to lure top world artists to perform at generally free concerts, while much the country remains mired in poverty.

In past years the festival has been attacked by Islamists for inviting gay performer Elton John in 2010 and by activists for the cost of attracting Shakira and other high profile acts in 2011, but this year the theme of protest is freedom of expression.

Just a week before the festival began, Human Rights Watch slammed Morocco for sentencing a rapper to a year in prison for lyrics deemed insulting to police — a common theme in rap music elsewhere in the world.

“Morocco hosts one famous international music festival after another each spring, but meanwhile it imprisons one of its own singers solely because of lyrics and images that displease the authorities,” Sarah Leah Whitson, Mideast director of the group said in a statement. “Morocco should be known as a haven for world music, not for locking up singers with a political message.”

Moroccan rapper Mouad Belghouat, known as El-Haqed, or “The Enraged” was convicted on May 11 of “showing contempt” to public servants with his song “Dogs of the State” about police corruption. He is known for his political activism and vitriolic songs attacking social injustice, the monarchy and corruption.

A week later, dissident poet Youssef Belkhdim was convicted of attacking police — a charge he denies — at a sit-in he organized in support of Belghouat and sentenced to two years in prison.

The two men belonged to Morocco’s pro-democracy February 20 movement that last year brought tens of thousands into the streets protesting corruption and calling for political reform.

The extravagant sums spent on the Mawazine have been a mainstay of the movement’s slogans. Festival organizers maintain that the Mawazine’s estimated $7 million price tag is worth it because it improves Morocco’s image abroad and gives people at home access to music from around the world. The festival is funded largely by corporate sponsors with strong ties to the state. 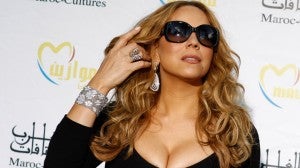 Tens of thousands attend each of the festival’s eight venues which present Arabic music, Moroccan music, music from sub-Saharan Africa as well as international acts, which this year included Evanescence, the Scorpions, Gloria Gaynor, Nigel Kennedy and Jimmy Cliff.

Most of the acts have free sections open to the public and on Tuesday, families strolling along Rabat’s Bouregreg river stopped to listen to Beninian songstress Angelique Kidjo belt out classics from South African diva Mariam Makebe and talk about the struggle against apartheid.

But for critics, there is irony in punishing artists at home while hosting international ones known for their support of freedom of expression. Lenny Kravitz, for instance, has striven in song after song to confront America’s tortured attitude about race.

“I think that people should really say what they feel — everybody has the right to speak their mind, you see how things change in places where people were once condemned,” said Kravitz at a press conference Thursday when asked about politics in music. “When I was in Brazil a couple of years ago, I was talking with (musician and activist) Caetano Veloso who dealt with that same thing, who did jail time — and now he has made a difference.”

Salif Traore of the Ivorian band Magic System said that for African artists, speaking truth to power and freedom of expression is what their music is all about.

“We in Africa, we say that artists, musicians and singers are the eyes, ears, and mouths of the people,” he told The Associated Press, when asked about his views on the El-Haqed case.

He said the Mawazine, which is run by a close confidant of King Mohammed VI, eats up the lion’s share of corporate sponsorship so that little is left for other festivals around the country.

As millions are being spent to lure in big name acts, local theaters and dance schools around the country are closing down because of a lack of funding.

“A country which puts its artists in prison simply for expressing themselves with their voice or their instruments cannot pretend to support culture,” he said. “That’s impossible.”