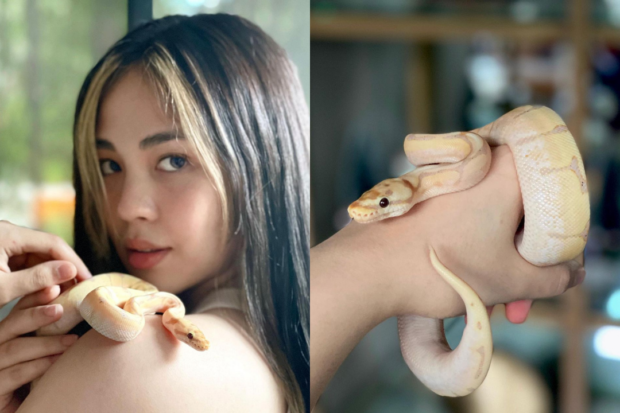 Janella Salvador has introduced fans to her second pet snake Valentino as she prepares to play the Filipino supervillain Valentina in the upcoming “Mars Ravelo’s Darna: The TV Series.”

The actress showed off Valentino on her Instagram page yesterday, Dec. 14. The yellow ball python can be seen hissing and crawling on Salvador’s shoulder.

“Because two is better than one? Welcoming this baby to my zoo. His name is Valentino (see what I did there?),” she said, seemingly alluding to her role in the TV series.

This is not the first time Salvador has welcomed a reptile into her family. Earlier this month, she introduced her 5-month-old snake Versace.

Salvador was revealed to play Valentina, superhero Darna’s nemesis from the original comic books, in a casting event for ABS-CBN last month. Darna will be portrayed by actress Jane de Leon.

For series director Chito Roño, Salvador delivered an impressive audition for the Valentina role. Given this, he believes the actress “would do justice” to the character. Roño also teased that “Mars Ravelo’s Darna: The TV Series” will show a “modernized” version of the supervillain.

Actors who are also part of the new Darna series are Iza Calzado, Joshua Garcia and Zaijian Jaranilla, among others.

“Mars Ravelo’s Darna: The TV Series” started taping on Nov. 15. A premiere date for the show has not yet been announced as of this writing.  /ra

Chito Roño believes Janella Salvador ‘would do justice’ to Valentina