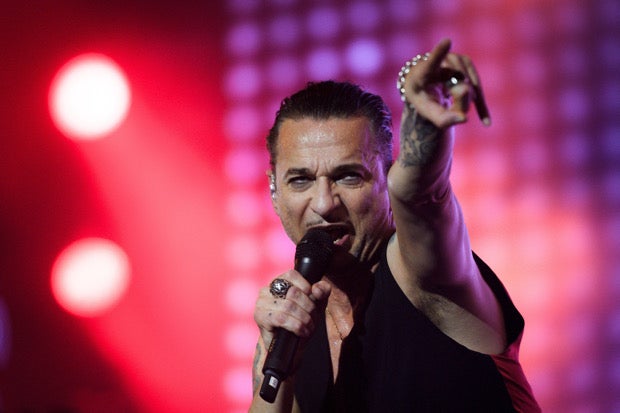 Dave Gahan, the revered singer with electronic pioneers Depeche Mode, says he discovered newfound vigor plunging himself into an unlikely set of covers for his other group’s new album “Imposter.”

Singing with the band Soulsavers, he takes on a wide-ranging set, mixing classics from Nat King Cole and Elvis with more eclectic choices such as Frank Ocean or Cat Power.

He even tackles one from that most outrageously talented of vocalists, Jeff Buckley.

“You have to take risks if you want to change,” he told Agence France-Presse on a visit to Paris.

“What this record did for me, the process of recording it, was to realize how amazing it is where I am — the opportunities I have around me if I just take the risk to explore them,” he said. “These songs once again gave me a new vigor to step into a character that felt familiar.”

But even someone as successful as Gahan knows imposter syndrome. He may have hogged the limelight in Depeche Mode, but the songs, until recent years, were all the work of instrumentalist Martin Gore.

“We all feel like imposters now and again,” said Gahan. “Even before I made music, when I was a teenager, I was looking for something to be a part of, to disappear in, to be accepted. That’s part of life for all of us.”

Gahan has found a second home with Soulsavers, a rotating group of musicians with a love of bluesy rock and gospel.

Now on their third album together, the band’s sound fit well with Gahan and his rocky history.

Turning 60 next year, he has been through severe addiction and survived multiple overdoses, an on-stage heart attack and even attempted suicide.

“There are behaviors that you think are solutions to how you feel, but it’s not real — drugs, alcohol, love, whatever,” Gahan said.

“But music is the one consistent thing in my life that’s reminded me that it’s something I really care about.”

“Soulsavers, over the course of 20 years, have developed a sound, an atmosphere that I’m very aware of and I fit very nicely into that atmosphere. I can do my best performances in there,” said Gahan.

Led by Rich Machin, Soulsavers recorded their new album before the pandemic in Malibu at the Shangri-La studio of mixing desk sorcerer Rick Rubin.

But they were not just there for the sunshine: Rubin produced the beloved Johnny Cash covers album “American Recordings,” which includes the Depeche Mode classic “Personal Jesus.”

Machin and Gahan talk with childish glee of the live recording experience.

“It’s sort of a lost art — performance,” said Gahan. “I’m trying to hold on to it because the most important part of what you do is capturing a performance. With my experience, with 40 years of making music, I knew we had captured something special.”

The fear was that the events of the past 18 months might have destroyed the magic they captured in the studio.

“We weren’t in a room together for two years,” said Machin. “The chemistry can alter, and it’s been a pretty weird time, so you come back into it with a deep anxiety, but within 24 hours of being back together you realize it’s fucking great still.”

“Those two years — it’s like it never happened.” AP/JB