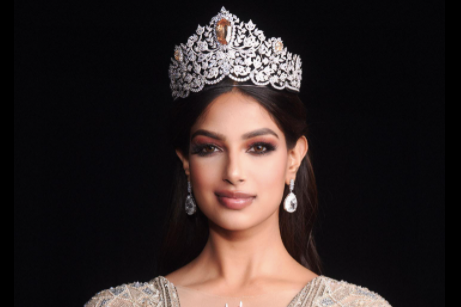 MANILA, Philippines — Despite the threat posed by COVID-19 and calls for a boycott in support of Palestinians, the 70th edition of the Miss Universe pageant pushed through as scheduled in Israel on Monday, with Miss India Harnaaz Sandhu besting 79 other contestants to win the crown.

The Bollywood actress who is also working on her master’s degree in public administration impressed the judges with her confidence in the final round of questions. Asked what advice she would give young women, Sandhu said, “Stop comparing yourselves with others and let’s talk about more important things happening worldwide. Come out, speak for yourself, because you are the leader of your life. You are the voice of your own.”

She followed two other winners from India: Sushmita Sen who won in the Philippines in 1994 and Lara Dutta who was crowned in Cyprus in 2000.

Another heavy favorite, Paraguay’s Nadia Ferreira, settled for first runner-up while South Africa’s Lalena Mswane, who advanced to the semifinals by garnering the most online votes, was named second runner-up.

Mswane, who holds a law degree, found herself in a quandary before departing for the global tilt when the South African government withdrew support for her participation to protest Israel’s apartheid and show support for Palestinians.

The global health crisis posed another threat to the international competition yet again, with the discovery of the Omicron variant in some countries, including Israel. This prompted the Israeli government to shut its borders to all international travelers in November although it granted special access to those involved in the pageant.

The Philippines’ Beatrice Luigi Gomez sustained the country’s streak of landing in the finals since 2010. The 26-year-old Cebuana finished in the Top 5, together with Colombia’s Valeria Ayos, who was crowned Miss Earth Water in 2018 in the Philippines.

Gomez, a Navy reservist and model from Cebu, was the first openly gay representative from the country in the Miss Universe pageant.

Miss Universe Philippines Creative Director Jonas Gaffud took to social media to congratulate her, saying, “I am very happy and so proud of you, [Gomez]! You fought hard and put the Philippines back in the Top 5 at Miss Universe.”

Malacañang also lauded Gomez with acting presidential spokesperson Karlo Nograles saying she brought joy to the people and honor to the country, and inspired many.

“A member of our Armed Forces, an athlete, and a youth advocate, Ms Gomez is an inspiring figure whose participation in Miss Universe allowed the world to see what we in the country witness every day: the strength, grace, and beauty of the Filipino woman,” he said in a statement.

Many Cebuanos watched the pageant on television while some gathered in hotels to cheer for Gomez.

Her mother, Ping Gallarde Gomez, said in a media interview that she was so happy over her daughter’s achievement. “Win or lose, we love her very much,” she said.

“She did everything she could for our country. I believe that if the crown was really for her, then she would get it. If not, it’s all right. She already achieved a lot in her life,” she added.

Gomez’s creative team leapt for joy when she made it to the Top 5. Her stylist, Edward James Castro, said they were so proud of the beauty queen.

For Cebu City Mayor Michael Rama, “the important thing is Bea made it to the Top 5. That is already an accomplishment.”

During the pageant, Gomez was asked by Miss Universe 2016 Iris Mittenaere on her opinion of mandating a universal vaccine passport given the ever-changing COVID-19 situation.

“I believe that public health is everyone’s responsibility, and to mandate vaccine inoculation is necessary. If mandating vaccine passports would help us in regulating the rollouts of the vaccine, and mitigate the situation of the pandemic today, then I would agree on mandating the necessary passport of vaccination,” she replied.