Nicole Kidman brings Lucille Ball to life in ‘Being the Ricardos’ 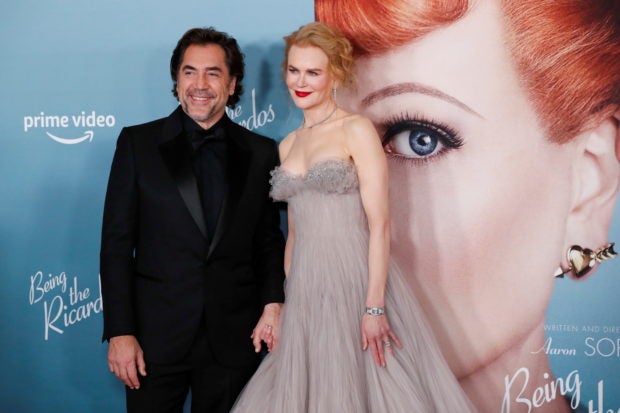 Cast members Nicole Kidman and Javier Bardem pose during the premiere for the film Being the Ricardos at the Academy Museum of Motion Pictures in Los Angeles, California, U.S., Dec. 6, 2021. Image: Reuters/Mario Anzuoni

LOS ANGELES — Actors Nicole Kidman and Javier Bardem on Monday launched their latest film “Being the Ricardos” in Los Angeles about Hollywood icon Lucille Ball and Desi Arnaz, who starred in the classic American sitcom “I Love Lucy” but were also a couple off-screen.

Tony Hale, who plays the sitcom’s executive producer Jess Oppenheimer, said audiences don’t need to know “I Love Lucy” prior to watching the film, which was written and directed by Aaron Sorkin.

“Sorkin always wanted us to focus on the humanity of what these characters are going through,” Hale said. “They’re human beings dealing with high stakes.”

During one week of the sitcom’s production, Ball is not only accused of being a Communist by the media, but there are reports that Arnaz is being unfaithful to her. She also discovers that she is pregnant.

Despite showing the couple at their lowest, their daughter Lucie Arnaz has given high praise to the production, saying that Kidman has “my mother’s soul.”

The film depicts the huge strides Ball made as a woman in show business, heading her own production studio and being pregnant on camera.

“She’s the only woman in the room, a room filled with men, with executives and she held her own and was self-respecting and so smart about what works in comedy and what needs to be done in terms of respecting the audience,” said Ball’s real-life friend Linda Lavin, who plays one of the sitcom’s writers.

Bardem told Reuters it was not ideal to shoot the film during the pandemic as he and Kidman were unable to meet prior to the filming to create a comfortable relationship.

“But it happened. It happened because she’s a great actress, and we did our homework and we came very prepared for it,” Bardem said, referring to Kidman.

“Being the Ricardos” will be released in theaters on Dec. 10 in the United States before streaming on Amazon on Dec. 21. JB