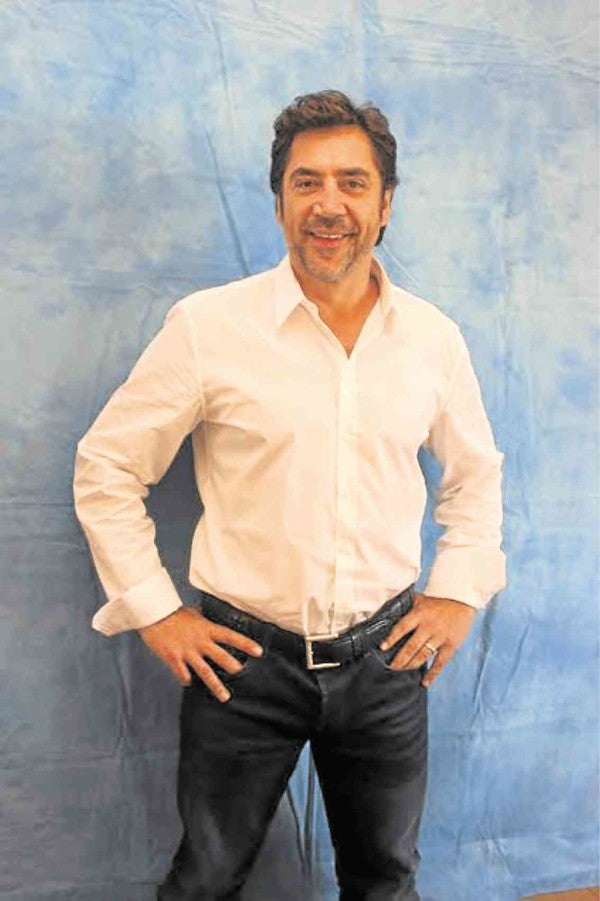 The Norwegian directing pair behind the acclaimed “Kon-Tiki,” Joachim Ronning and Espen Sandberg, inject life back into the floundering franchise, coupled with a fine supporting cast led by Javier Bardem (the Salazar character) and spectacular visual effects in a time when you think you’ve seen all that CGI can do.

But wait when you see the VFX in this one, still produced by Jerry Bruckheimer and anchored by Johnny Depp as our drunken, bumbling, mascara-wearing Jack Sparrow.

Javier is a wonderful new villain, a ghostly antipirate Spanish Navy officer who is determined to exact revenge on Jack Sparrow.

Sans the terrifying undead makeup he wears in the movie, Javier looked fresh in a crisp white shirt, black jeans and sneakers in this interview at the Montage Beverly Hills Hotel.

The 48-year-old Madrid-raised actor also talked about his wife, Penelope Cruz (with whom he has two kids—Leo, 6, and Luna, 3), and their two coming films together, Fernando Leon de Aranoa’s “Escobar” and an untitled Asghar Farhadi Project.

The Oscar and Golden Globe best supporting actor winner also dished about working for the first time with Johnny Depp and seeing his “beautiful butt” (Depp played a drag queen) in Julian Schnabel’s “Before Night Falls.”

How did your Spanish captain character come about? They brought this idea of a Spanish captain. The good thing for me in such a big movie as this one was that Disney, Jerry (Bruckheimer) and the directors, Joachim (Ronning) and Espen (Sandberg) were not only open to suggestions. They were also encouraging me to bring ideas to it.

Together, we found the physicality of the character—the way he’d look, talk and move—and all this feeling of rage and pain came to me. And that stayed there.

Talk some more about the challenges of an effects-heavy movie like this for an actor like you. The most challenging thing was how to work with special effects, when things are not there for you to interact with. There was a little bit of that in “Skyfall.” In this movie, I was in a real boat, but there was no sea (laughs). So it
was like, there’s something missing here.

But once I lost [the “shyness”], it was fine because it had to do with the imagination—which, at the end of the day, is the ultimate goal for an actor: to imagine things.

When I saw the final result on screen, I was blown away by how those things were beautifully [realized].

How long was the makeup process? It was a three-hour process, which was not such a long time for great makeup. I did a movie called “The Sea Inside,” where makeup was five hours long.

The makeup that you see in the movie is exactly the way that it looks on my face. That’s how good those guys are. They won the Oscar for “Mad Max.”

By this time, are you comfortable using guns in scenes? No. I go, ahhh (laughs)! I remember when I was doing “No Country for Old Men,” I was killing people with these guns. When they said, “Cut,” I would throw the guns (laughs). I was scared of the whole thing. They were laughing at me.

What was it like to work with Johnny Depp again? I keep telling this story, but I’ll tell it again because it’s important. I met Johnny back in 1999 in Mexico. We were doing this movie called “Before Night Falls.” He’s a good friend of Julian’s (Schnabel, director).

He did two scenes, one where he played this very strong general. He also played this drag queen, who’s putting the jailed writer’s manuscripts in his ass and taking them out of prison.

I was coming out of the trailer and saw this blonde hair and beautiful butt. I said, “Whoa, that’s a nice butt!”
It was Johnny’s butt (laughs). He looked so sexy, and he was great in the scene. I was star-struck.

I remember the first time he went on set. Everybody was nervous about how he was going to behave. There was only one umbrella. We were shooting on the rooftop of a castle in Veracruz in August. It was
3 p.m., and it was super hot.

So, of course, production brought the umbrella to him, and he was like, “No, the umbrella needs to go to the guys working the most.” It tells you a lot about what this person’s priority is.

He’s a beautiful person to be with. He will be up there with Buster Keaton in the future because the way he moves and his body language as Jack Sparrow is extraordinary.

He never told me how to act with the blue screen, but I saw in him how to have fun and find the joy of doing these kinds of movies.

Can you talk about “Escobar”? We finished shooting “Escobar” in December. I have been trying to play Escobar since 2000. At the time, I was offered “The True Story of Killing Pablo.” Then, [I was] offered all the Escobar projects that you can imagine, but I always refused them, because I felt they were all one-dimensional characters.

[But] Escobar was more than a one-dimensional character. Otherwise, why would he be worshipped today by so many people in Colombia? Of course, he was hated, as well. You have to bring those two colors to it.

A lot of other “Escobar” movies happened. But I got to tell the story I wanted to tell—the relationship between him and his lover, Colombian journalist Virginia Vallejo (played by Penelope), who was, in a way, involved in creating Escobar as we know him.

How do you juggle your schedule so you can also spend time with your kids? That’s why Penelope and I do movies together (laughs), so we can all travel at the same time. Next, we’re going to do this movie with Asghar Farhadi, which we’re so excited about. Yeah, it’s all in the family.

We’re very blessed, period. We belong to the 8 percent of actors who can make a living from acting. What we try is to be the couple in which one of us is with the kids and the other one is working.

What can you tell about the Asghar Farhadi film? What I can tell you isn’t much. Like, Asghar flew to Spain and started to study its culture and language. He’s writing as we speak now.

I know that it’s a funny story. It’s about relationships, not only between my character and Penelope’s—and there’s going to be a kidnapping.

Working with Asghar is like working with a 21st Century (John) Cassavetes. I’m sure it’s going to be extraordinary. We start rehearsing as soon as I get back [to Spain]. I can’t wait.