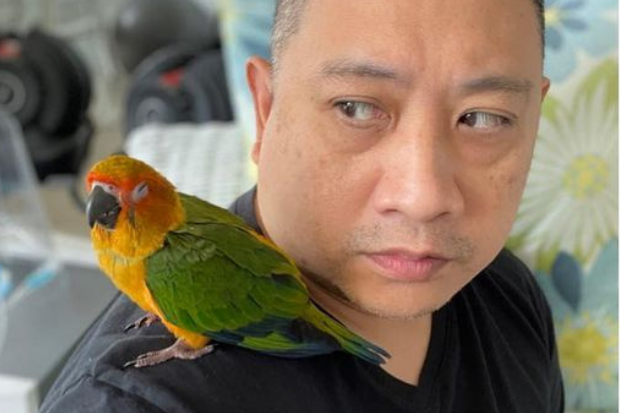 Michael V. is heartbroken over the sudden death of his pet sun conure bird, Pepper, who he expected to live up to 30 years.

The comedian expressed his grief over Pepper’s death while showing photos of the animal on his Instagram page yesterday, Dec. 6. He also showed his departed pet lying in a small box filled with various flowers.

“It’s our first time losing a pet after a long while. Hindi yung nawala or naligaw or ninakaw kundi ‘namatayan’ ng alaga (Not one that went missing, was lost or stolen, but a pet that died),” he told fans.

Michael V. narrated that his house helpers saw that Pepper had flown to a nearby fence and gotten snatched by a cat as soon as he landed.

(Our house helpers were not able to do anything given how quick the events happened. And, of course, you can’t also blame the cat.)

Michael V. then recalled one time that Pepper escaped from their home and did not return until the day after.

(There was one time that Pepper flew away and did not return overnight, but when he came home the following day after a night of rainfall, he seemed to have regretted it.)

Given this, the comedian’s family felt assured that the bird would no longer leave. They also found out that a sun conure can live up to 30 years, so they felt confident that Pepper would be with them “for a long time,” which made the bird’s death so sudden for them.

“Had I known how to perform CPR for birds, baka sinubukan ko eh. Lahat kami sa bahay, nag-iyakan (I would have tried. All of us at home cried),” he said.

Michael V. then opened up on how Pepper made his family happy amid the COVID-19 pandemic, which led to them crying even more over the bird’s death.

Michael V. added that he was frustrated while mourning the death because he felt “dictated by logic.”

“[Logic] dictates that Pepper is, well… ‘just a bird.’ Sometimes I even call him a ‘dumb bird’ […],” he added. “[But] what made Pepper different is that he’s our dumb bird and we absolutely love his dumbness nonetheless.”

The comedian then addressed his pet, expressing his love for the departed animal.

“We love you, Pepper and we’re going to miss you. We all wish you could’ve stayed for a little longer,” he addressed Pepper. “Goodbye forever. Now you are truly free.”