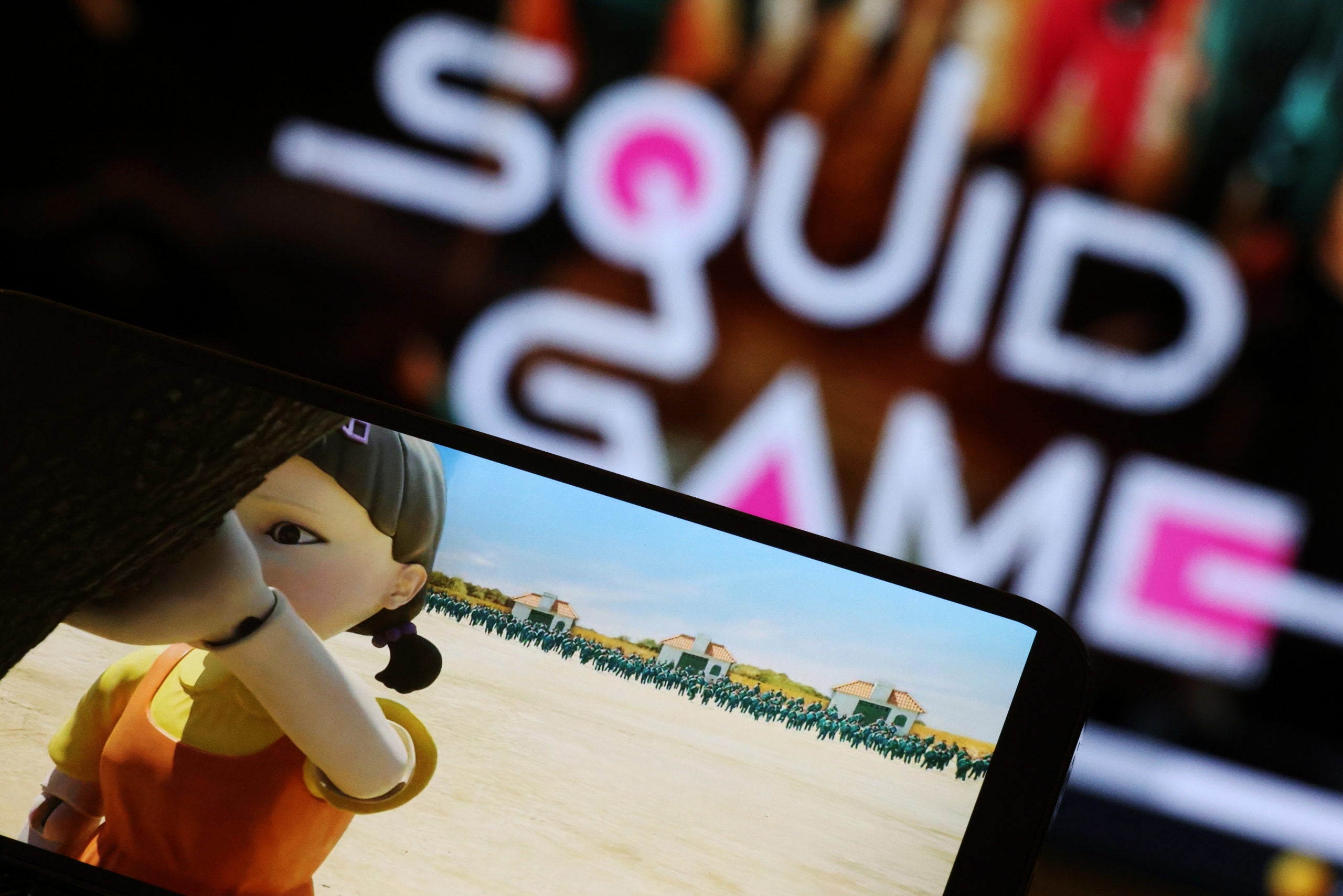 The Netflix series “Squid Game” is played on a mobile phone in this picture illustration taken September 30, 2021. (REUTERS/Kim Hong-Ji/Illustration)

NEW YORK  – More minorities are showing up in mainstream U.S. entertainment, from films and TV to music, as audiences demand stories that reflect the world’s diversity, showing that inclusion is good business, industry executives said.

“Our industry has caught up with reality. The majority of the world is actually Asian,” said Bing Chen, president of Gold House, a nonprofit collective that promotes Asian Pacific Islander voices, on a panel at  the  Reuters Next conference broadcast on Thursday.

“Shang-Chi and the Legend of the Ten Rings,” the first Marvel movie to star an Asian superhero, surpassed $400 million at the box office less than two months after its mid-August release. “The Eternals,” which opened in November, features a diverse cast including Marvel Studios’ first deaf superhero and the first gay kiss in the Marvel Cinematic Universe.

The proliferation of audience data debunks much of Hollywood’s conventional wisdom that had devalued women and other minorities, said Liz Jenkins, chief operating officer of Hello Sunshine, the women-led media company cofounded by actor Reese Witherspoon.

“American audiences will watch stuff with subtitles. It’s not just about ticking a box for DE&I (Diversity, Equity and Inclusion), about being the right thing to do. It’s really being great business.”

Global megahit “Squid Game,” which debuted in September, helped Netflix Inc win more new customers than expected to the world’s largest streaming service. “Hellbound,” another South Korean series, followed with a global debut at No. 1 on Netflix in November.

Chen credits decades of work by executives like CJ Group Vice Chairwoman Miky Lee, an early DreamWorks investor who was a lead producer and funder of “Parasite.” The South Korean feature was the first non-English-language film to win the Oscar for best picture. Through her CJ E&M company, Lee helped propel K-pop idols such as BTS to the world stage.

“This is about minorities founding different companies and trying to reshape what media looks like,” Chen said. “It’s about incumbents who’ve always been doing twice as much to get half as far. It’s just good that we’ve finally arrived.”

Hello Sunshine, founded in 2016 to put women at the center of stories, was sold for $900 million to a firm backed by private-equity giant Blackstone Inc in August.

“Who is selecting the content that gets made? Are they greenlighting that content and ensuring appropriate representation?”

“We’ve taken a really great step in the right direction. But we have to constantly be evaluating bias in this new structure and how to refine it,” Jenkins said.

The paucity of minority-led content has led to unfair expectations for Asian, Latino and Black-led films, said Chen, who started a campaign to boost the box office for the debut of “Crazy Rich Asians” in 2018. Gold House has since formed partnerships to buy out opening weekends at theaters for films with diverse casts.

“We have this damning expectation that minority artists have to be commercially sustainable, critically acclaimed, and culturally imperative all at once,” Chen said. “But if you flip it, it’s actually an excellent opportunity for any financer, studio, network, streaming platform to hit all audiences at once.”