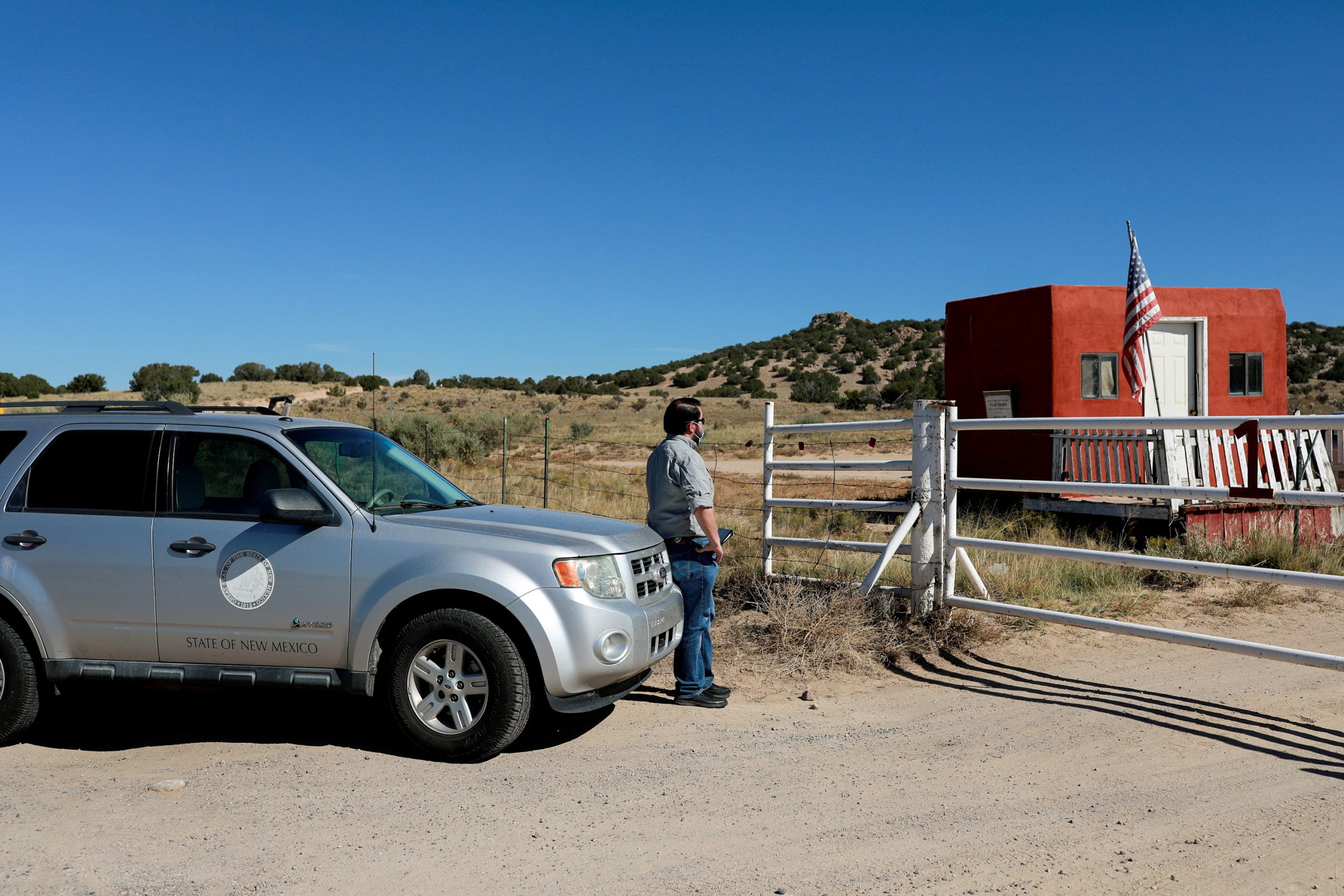 A compliance officer from the State of New Mexico waits to enter Bonanza Creek Ranch where on the film set of “Rust” Hollywood actor Alec Baldwin fatally shot cinematographer Halyna Hutchins and wounded a director when he discharged a prop gun on the movie set in Santa Fe, New Mexico, U.S., October 22, 2021. (REUTERS/File Photo)

LOS ANGELES  – Alec Baldwin told ABC News in an interview airing on Thursday that he does not know how a live bullet got on the “Rust” movie set and that he did not pull the trigger of the gun that killed a cinematographer during a rehearsal.

The interview marks Baldwin’s first public account of the Oct. 21 incident, which is still being investigated by authorities in New Mexico.

In excerpts released ahead of the Thursday evening broadcast, Baldwin said he did not pull the trigger on the gun, opening the possibility that the .45 caliber Colt revolver had gone off accidentally.

“I would never point a gun at anyone and pull a trigger at them,” Baldwin said, according to an excerpt.

Baldwin also told ABC television’s George Stephanopoulos that he had “no idea” how a live bullet got on the movie set and that it was not supposed to be on the property.

“I think back and I think about what I could have done,” he told Stephanopoulos.

Cinematographer Halyna Hutchins was killed and director Joel Souza was wounded when a gun Baldwin had been told by crew members was safe fired a live bullet. Baldwin was the star and a producer on the low-budget Western.

Michigan-based firearms expert Steven Howard told Reuters on Thursday that a gun can misfire if the trigger or hammer suffers a “very, very rare” major breakage or malfunction. A firearm could also misfire if it is clogged with debris, he said.

“He may not remember pulling the trigger. That happens quite regularly with traumatic events, but if he insists that he did not pull the trigger, I find that very hard to believe,” Howard said. “If someone puts me in the room with that gun for two minutes, I’ll tell if he’s a liar or not.”

The Santa Fe County Sheriff’s Office told Fox News that the FBI is examining the firearm to determine how it fired.

“Guns don’t just go off,” Sheriff Adan Mendoza told Fox News Digital. “So whatever needs to happen to manipulate the firearm, he did that and it was in his hands.”

An attorney for “Rust” assistant director Dave Halls said during an interview that aired on Thursday on “Good Morning America” that her client corroborated Baldwin’s account of the incident.

“Dave has told me since the very first day I met him that Alec did not pull that trigger,” attorney Lisa Torraco said of her client, who was on the set. “His finger was never in the trigger guard.”

Torraco did not elaborate on what Halls may have told her about what he had seen in the seconds before the gun discharged.

No criminal charges have been filed. The film’s producers have said they are also conducting an internal probe.

Santa Fe authorities are focusing on how a live bullet, rather than a blank, ended up in the gun and how other live rounds got onto the set at the Bonanza Creek Ranch. Court documents on Wednesday showed that authorities had recovered some suspected live ammunition from a local supplier of movie props and weapons.

Baldwin, best known for playing an egotistical TV network executive on the comedy series “30 Rock,” has kept a low profile since the accident.

He was photographed in distress after the shooting and said in a statement that he was shocked and heartbroken for Hutchins’ husband and young son.

Baldwin spoke briefly with paparazzi on a roadside in October when he called the shooting a “one in a trillion” episode.

Two crew members have filed civil lawsuits accusing Baldwin, the producers and others on the production of negligence and lax safety protocols.