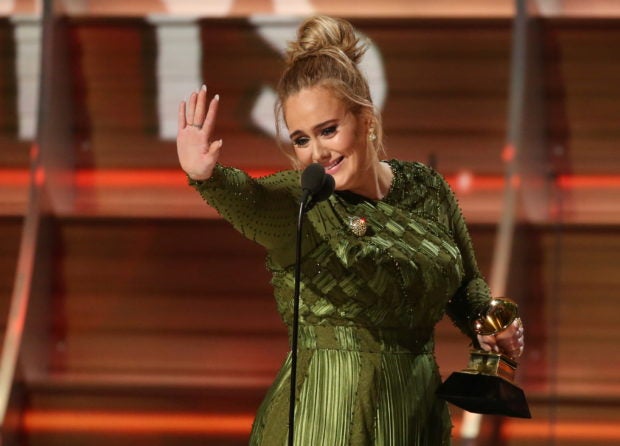 FILE PHOTO: Adele waves to singer Beyonce who is in the audience as she and co-song writer Greg Kurstin (not pictured) accept the Grammy for Song of the Year for “Hello” at the 59th Annual Grammy Awards in Los Angeles, California, U.S. , February 12, 2017. REUTERS/Lucy Nicholson/File Photo

LONDON — Music star Adele soared straight to the top of the UK charts on Friday with her new album “30”, making a triumphant and record-breaking return.

One of the world’s best selling singer-songwriters, the Grammy Award winner released her fourth studio album last week, with critics and fans praising her honesty on the record she said she made to explain her divorce to her son Angelo, 9.

“It becomes Adele’s fourth UK Number 1 album; she has now reached Number 1 on the Official Albums Chart with all of her studio albums, a record for a female act,” the Official Charts Company said in a statement.

“30” was also the most-streamed album this past week, recording 55.7 million plays across its 12 songs, the Official Charts Company said.

Known for her ballads about heartbreak and nostalgia, Adele also topped the UK singles charts for a sixth week with “Easy On Me”, the first track to be released from “30”.

The song has overtaken her 2011 mega hit “Someone Like You” to become her longest-running Number 1 on the Official Singles Chart. “Oh My God” and “I Drink Wine”, two other singles from “30”, also made it into the top 5.

The 33-year-old is expected to top charts elsewhere. Earlier this week, Billboard said “30” was the fastest-selling album in the U.S. after just three days, citing initial data.

Like her previous albums, “30” is named after a milestone age in Adele’s life. The singer announced her split from her husband Simon Konecki in 2019.

Read Next
Rabiya Mateo on what kind of guy will make her love again
EDITORS' PICK
SMDC’s Style Residences: A real estate investment that will always be on-trend
Start the year right with sustainable oral hygiene with SPLAT’s eco-friendly natural toothpastes
DILG presses local gov’ts: Restrict the unvaxxed folk
Drugstores as booster sites initially giving Sinovac, Astra
Health chief urges PAO head to get jabbed
Acer starts the year off strong with the Aspire Vero National Geographic Edition
MOST READ
Imelda Marcos trends on Twitter after octogenarian jailed for allegedly stealing mangoes
Mayor Vico counters vice mayor: ‘Did I say anything about his family?’
IATF places 4 provinces under Alert Level 4
SSS: Members on home quarantine due to COVID-19 can apply for sickness benefit
Don't miss out on the latest news and information.