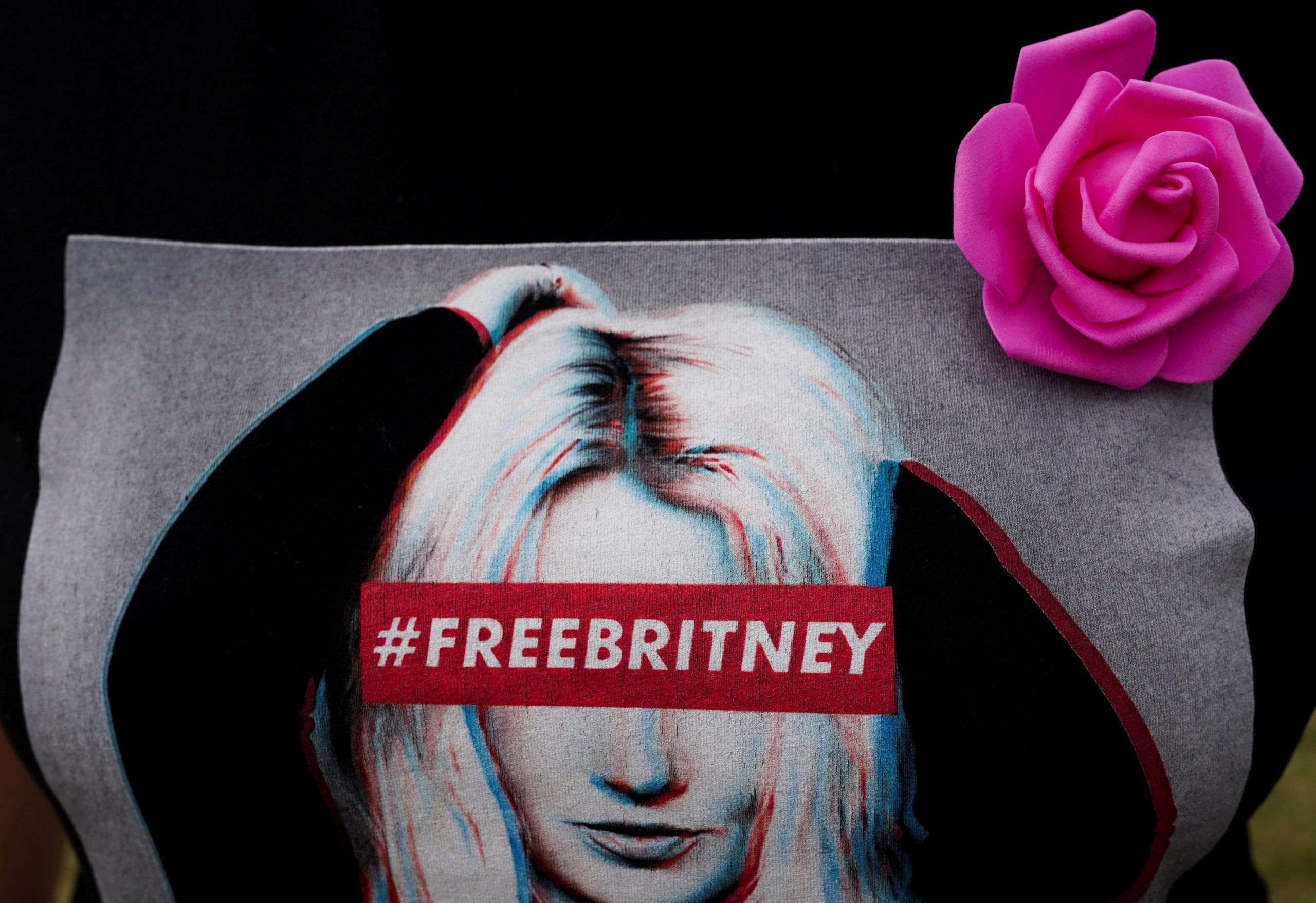 A demonstrator wears a T-Shirt in support of Britney Spears during a “Free Britney” demonstration on the Ellipse, near the White House, in Washington, U.S. October 23, 2021. (REUTERS/File Photo)

LOS ANGELES  – Pop star Britney Spears regained freedom over her life on Friday when a Los Angeles judge ended the conservatorship that has controlled it for 13 years.

“Effective today, the conservatorship of the person and the estate of Britney Jean Spears is hereby terminated,” Judge Brenda Penny said after a 30-minute hearing in which no one opposed ending the legal arrangement.

The judge added that the current conservator would continue working to settle ongoing financial issues in the case.

The 39-year-old “Piece of Me” singer had begged the court to terminate the legal arrangement that has governed her personal life and $60 million estate since 2008.

Spears did not attend Friday’s hearing in Los Angeles.

Fans outside erupted in cheers at the decision and broke into dancing and singing her hit “Stronger.”

The conservatorship was set up and overseen by the singer’s father after she had a public breakdown and underwent treatment for undisclosed mental health issues.

“The time has come after more than a decade for the conservatorship to be terminated in its entirety,” the singer’s lawyer Mathew Rosengart told Friday’s hearing.

LauriAnn Wright, the attorney for Jodi Montgomery, who had been entrusted with overseeing Spears’ personal life, told the judge there was “no reason this termination cannot happen and Ms. Spears cannot live a safe, happy and fulfilling life.”

Since revealing years of private anguish in tearful testimony in June, Spears has received a groundswell of public support and hired a new lawyer who moved aggressively to end the restrictions.

In June, she told the court she had been traumatized and that she wanted her “life back” as soon as possible. She said she had been forced to work and take medication against her will and was prevented from marrying or even getting her hair and nails done.

A key question on Friday had been whether Judge Penny might require Spears to undergo a mental health evaluation, a step often taken before ending a conservatorship. She did not do so.

Interest in the case was propelled in the past year by documentaries and the #FreeBritney movement of fans who questioned why the singer lived under restrictions while successfully touring around the world and earning millions of dollars.

In an unexpected move in early September, the singer’s father Jamie Spears reversed his stance on the conservatorship and said he supported termination because the arrangement had helped her and was no longer needed.

Penny suspended Jamie Spears from the conservatorship in late September, calling his involvement “toxic” to the singer’s well-being, and temporarily replaced him with an accountant.

Rosengart is pushing for Jamie Spears to be investigated for possible financial mismanagement of his daughter’s affairs.

Rosengart also wants an investigation into claims in a documentary in September in which a former security firm employee said the singer’s phone and emails had been monitored and that a listening device was placed in her bedroom.

Jamie Spears has said through attorneys that he helped his daughter rehabilitate her career and always acted in her best interest.