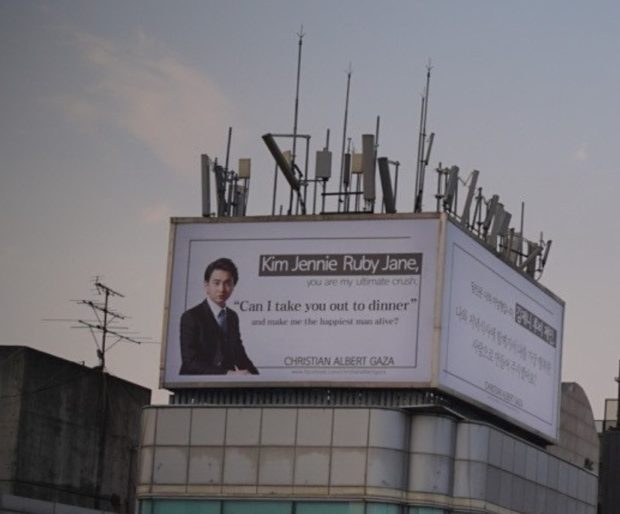 SEOUL — Online fuss continues after a billboard intended to win the affections of Blackpink’s Jennie was erected near the artist’s agency, YG Entertainment, in Seoul.

The ad was put up by Filipino businessman Christian Albert Gaza, who proclaims himself as Jennie’s No. 1 fan. Gaza had the two-panel ad — with one side in English and the other in Korean — installed atop a five-story building a few kilometers from the agency in Yongsan, Seoul. The billboard ad reads: “Kim Jennie Ruby Jane, you are my ultimate crush. ‘Can I take you out to dinner’ and make me the happiest man alive?”

Sharing the image of the billboard on Oct. 30 on his Facebook account, Gaza said he put up the ad because he did not know how to contact the K-pop star.

The billboard ad has raised the ire of some Blackpink fans online, who have condemned him as a “creep” and asked for the agency to take action to protect the K-pop star. YG Entertainment had not responded to the advertisement as of Sunday.

As criticism continued throughout the week for Gaza — a self-claimed former scammer-turned-millionaire businessman — he returned to his Facebook account on Saturday to defend his actions, calling for people to “be more rational,” and saying it was conducted in a “very publicized manner” to get a chance of being noticed by his crush, Jennie.

“Creepy pipz are those admirers who invade your privacy by stalking your private life such as place of residence, circle of friends, workplace, and the like. … As a global celebrity, I chose to express my admiration for Jennie Kim in a very publicized manner so that I can get at least 5% chance of being noticed by my ultimate crush,” he wrote.

Gaza has previously made similar plays before, drawing attention in past years for making public demonstrations of affection to celebrities in the Philippines using billboard ads and his Facebook account.