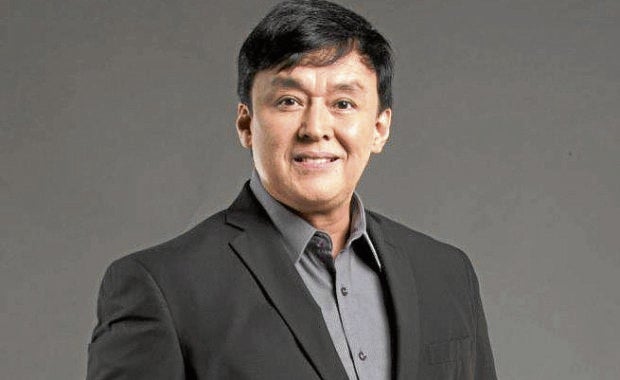 Rey “PJ” Abellana can now breathe a sigh of relief, knowing that his daughter Carla Abellana’s wedding with Tom Rodriguez, turned out to be a “success” despite all unexpected changes and bumps leading to the event.

“Because of all the pandemic-related problems, the wedding had to be relocated last minute. And the reception venue had to be moved somewhere farther,” he said in a recent virtual conference for the coming GMA 7 primetime series, “I Left My Heart in Sorsogon.”

The original venue of the ceremony was the Madre de Dios Chapel in Tagaytay Highlands in Talisay, Batangas. But because of unforeseen restrictions, the show-biz couple had to look for another one and ended up at the San Juan Nepomuceno Church in San Juan, Batangas. The reception was also moved to the same town.

“But in spite of everything, the wedding went very smoothly. It was successful,” Rey added. “All of us were happy and enjoyed ourselves. It was very memorable. And so we thank God for that.”

The seasoned actor believes that Carla found a good husband in Tom, whom he warmly welcomed to his family. “I’m happy. I know my daughter very well, and I trust her choices and decisions. Everything feels positive and we’re happy to have Tom in our family,” he said.

Rey isn’t one to pressure his children when it comes to starting their own families. “Having a baby is up to their plans; it’s their choice,” said the actor, who already has three grandchildren with his eldest daughter, Erica.

His only wish, he added, is that Carla and Tom stay true to their vows. “I want them to be happy. I want them to have a loving and successful family that will last forever,” he said. “And I hope that their vows—‘till death do us part … for richer or poorer’—come true.”

In “I Left My Heart,” Rey plays the father of lead star Heart Evangelista’s character. Shooting the said soap on location—while adhering to protocols—presented some challenges for him, he admitted.

“Of course, you have to be quarantined at a hotel. The trips to the locations were, at times, long and stressful. So, the challenge for me was staying in top condition on the set. The script and role given to me were good, so I wanted to take care of them. I wanted to portray my role as best as I could. We had to be alert,” he said.

Fortunately, the beauty of Sorsogon, he said, was more than enough to melt his worries away. 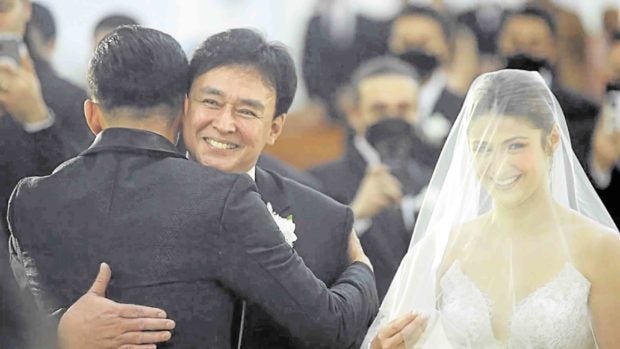 Bride’s father (center) hugs and welcomes groom to the family.

“While I have traveled around Bicol for different events in my past three decades in the industry, I had never explored Sorsogon until recently. Because of this series, I was able to go visit for the first time. There are lots of beautiful beaches, places we can all be proud of,” he said. I’m thankful for the opportunity to work and meet new people there. It was a beautiful experience.”

“It feels good working with young actors. You’re given a chance to guide them in your scenes together,” he said. “It feels good to help others every now and then. Because as the more senior actors on the set, we feel like it’s important to offer guidance—drawing from our own experiences—to make the scenes better.” INQ