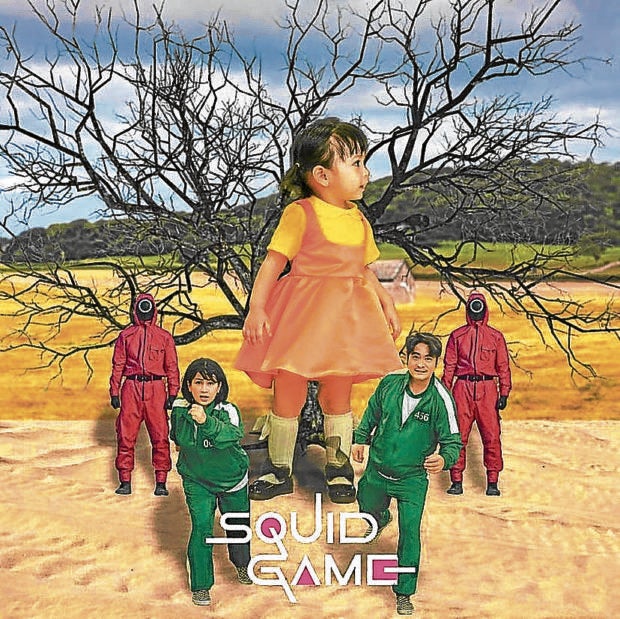 Regine Tolentino (below, left) with partner Dondi Narciso and kids dressed up as “Squid Game” characters

With “Squid Game” attracting more than 142 million Netflix households around the world, the dystopian survival drama from South Korea has unwittingly become the obvious theme this Halloween.

In Seoul, the demand for teal tracksuits and pink jumpsuits similar to those worn by the characters in the show, has had local garment vendors working double time, according to Reuters. A New York Times report, on the other hand, said that a shopping platform saw a spike in searches for “retro-inspired tracksuits, white slip-on sneakers, red boiler suits and white numbered T-shirts.”

Here in the Philippines, costume designers like Regine Tolentino saw similar demand. Right after posting a photo of her family dressed as “Squid Game” characters on Instagram, the actress-dancer-entrepreneur’s inbox was inundated with requests and inquiries.

“We’re huge fans of ‘Squid Game,’ so we started producing costumes for ourselves. Later on, we received so many inquiries about them so we decided to make a whole collection,” Regine, who runs a clothing store called “Regine Tolentino Atelier,” told the Inquirer.

And the orders didn’t come only from Filipino clients. “We were flooded with messages from all over the country, including the United States, Australia and Europe,” she said. “So, obviously, it’s a huge hit all over the world, and we’re happy to accommodate our clients’ requests.”

Regine has been creating costumes for different occasions and cosplay items for 22 years. And in her career as a designer, her atelier managed to become a licensee of Disney Philippines and a children’s costume supplier nationwide through SM Department Stores.

“I have always been a fan of dressing up for special events, so when I had the opportunity to open my boutique along with doing children’s wear, I decided to make costumes and cosplay items,” she said.

Do you craft the pieces alone or do you also collaborate with other designers?

All of the production for our costumes, especially the “Squid Game” costumes, are manufactured at our atelier. Oftentimes, we also collaborate with different stylists to create looks for celebrities. We also work with cosplayers such as Alodia Gosiengfiao to create amazing, award-winning costumes.

How does the fulfillment you get from being a costume designer differ from the kind you get from show biz endeavors?

Being a costume designer is more personal because I have direct contact with my customers and I get immediate feedback from them. My job as a designer is so fulfilling because I enjoy making people feel happy and confident through the clothes that they wear.

Do you personally enjoy dressing up for Halloween? Does your family usually go all out during the holiday?

I have always loved dressing up since I was a kid. And growing up in the United States, we really go all out for Halloween. I have shared this passion with my children and my partner when we dress up for special occasions—but most especially for Halloween.

I’m so glad that Halloween here in the Philippines is now celebrated. People also wear costumes for their themed parties and despite the pandemic, people still make the effort to dress up in costumes.

How has the way you celebrate or observe Halloween changed because of the pandemic?

I’m happy that things are slowly starting to get back to normal. Celebrating Halloween in the time of pandemic may be a bit different, but for my family, it’s a time to dress up. Even if it may not be in the company of others, people enjoy dressing up in costumes for their own enjoyment.

With the newest addition to our family, 1-year-old Baby Rosie (her third daughter, after Reigne, 22, and Reigen, 20), we have all the more reason to enjoy. We love dressing her up in character costumes such as Agnes from “Despicable Me,” the doll from “Squid Game” and Ariel from “The Little Mermaid.” In the end, even though times have changed, people still want to celebrate life. INQ