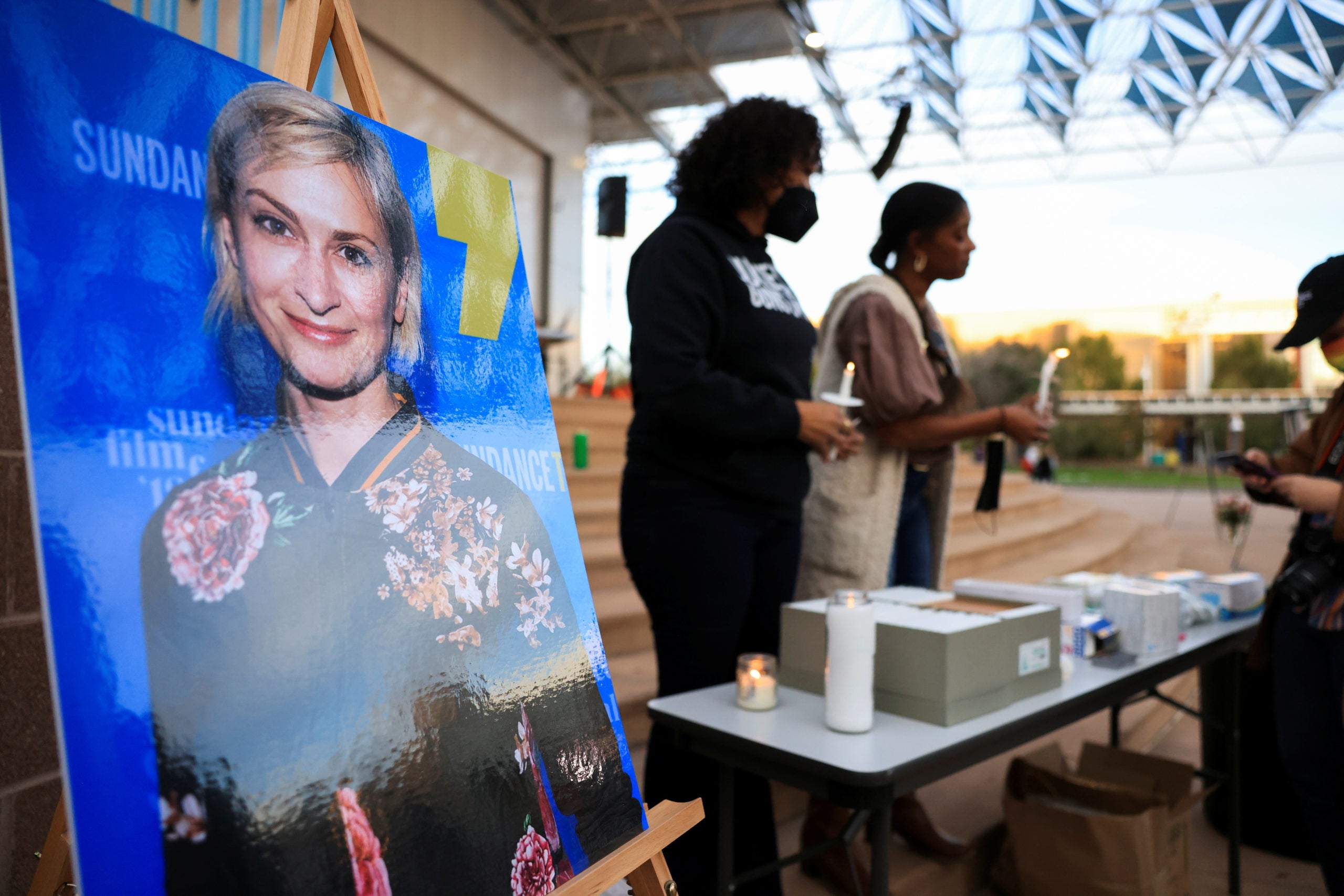 An image of cinematographer Halyna Hutchins, who died after being shot by Alec Baldwin on the set of his movie “Rust”, is displayed at a vigil in her honour in Albuquerque, New Mexico, U.S., October 23, 2021. (REUTERS)

SANTA FE, N.M.  – Alec Baldwin has been seen consoling the family of the cinematographer he accidentally killed on the set of his movie, as more reports emerged on Sunday of troubling practices during the filming of the Western “Rust”.

A distraught Baldwin was photographed outside a hotel in Santa Fe, New Mexico, on Saturday embracing and talking with Matt Hutchins, the husband of Halyna Hutchins, and their nine-year-old son.

Baldwin, 63, on Friday said he was shocked and heartbroken at the death of Hutchins. The 42-year-old was killed and director Joel Souza was wounded when Baldwin discharged a prop gun containing a live round that he had been handed and told was unloaded, authorities in Santa Fe have said in court documents.

In a statement read to a candlelight vigil on Saturday, Hutchins called his wife’s death “an enormous loss.”

No one has been charged in the fatal incident during a rehearsal on Thursday at the Bonanza Creek Ranch outside Santa Fe as the local sheriff’s office continues its investigation.

But multiple media and social media reports have raised concerns about safety protocols on the set of the low-budget movie, and have described a walk-out by several camera operators and their assistants just hours before the accident.

In one of the most troubling, celebrity website TMZ.com, citing unidentified sources connected to the production, said the gun handed to Baldwin had previously been used by crew members for target practice off-set, using real bullets.

Reuters could not verify the report and police in Santa Fe did not respond to inquiries on Sunday.

Among the concerns reported among crew members were other incidents involving prop guns. According to the Los Angeles Times, more than a week ago Baldwin’s stunt double accidentally fired two rounds from a prop firearm after being told it was “cold”, an industry term meaning a weapon is not loaded with ammunition, including blanks.

Rust Movie Productions said last week that although they “were not made aware of any official complaints concerning weapon or prop safety on set, we will be conducting an internal review of our procedures while production is shut down.”

According to court documents, the prop gun was handed to Baldwin by the film’s assistant director, Dave Halls, who has more than 20 years’ experience in the business.

Film producer Aaron B. Koontz, who worked with Halls on two previous movies but was not involved in the making of “Rust”, told the Los Angeles Times Halls was a good manager.

“Dave is extremely efficient and he’s very good at keeping the pace going and just moving at the speed that you have to move at in order to make your days,” Koontz told the newspaper.

However, special effects technician Maggie Goll, who worked with Halls on the 2017 Hulu television series “Into the Dark”, had a different view.

Halls did not respond to requests for comment on Sunday. Also involved in the probe is the movie’s chief armorer, Hannah Gutierrez. She could not be reached for comment.

About 200 people took part in the vigil for Hutchins in Albuquerque on Saturday. While organizers emphasized that the event was to honor Hutchins’ memory, rather than focus on her death, some in the crowd held signs that read “Safety on Set.”

A second vigil is planned in the Los Angeles area on Sunday.