For Alex Diaz, Hollywood film ‘Glitter & Doom’ is his biggest break ‘not only as a Filipino, but also as a queer actor’ | Inquirer Entertainment
Close
menu
search

For Alex Diaz, Hollywood film ‘Glitter & Doom’ is his biggest break ‘not only as a Filipino, but also as a queer actor’ 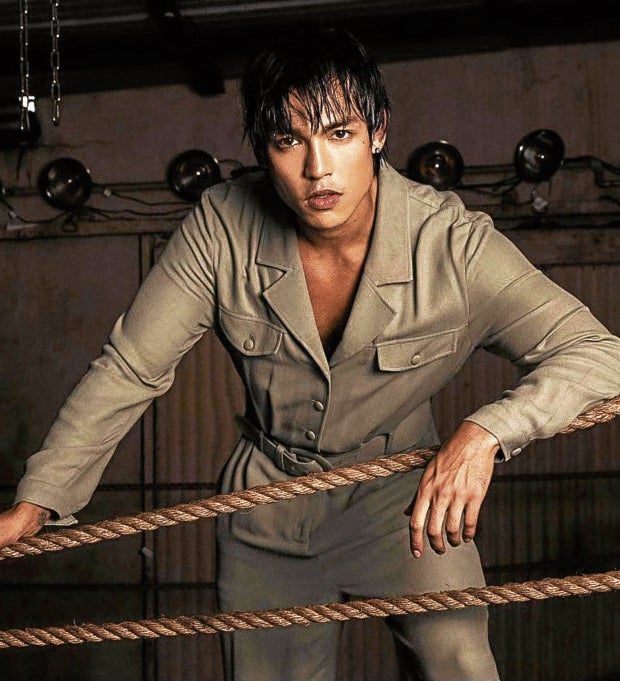 When he was outed online by a fitness coach in 2019, Filipino-Scottish actor Alex Diaz was convinced that his career in show biz was all but over.

“After that incident, I was about to throw in the towel… I apologized to my management and thanked them for everything they have invested in me. I was thinking of moving to Canada to start over,” he told the Inquirer in an one-on-one interview arranged by Cornerstone Entertainment.

The notion that one’s sexual orientation—bisexuality, in his case—can potentially break a career was something Alex couldn’t fully reconcile. “You’re told that people will not love you, because of what you do behind cameras. My family and management had this worry, too. And it wasn’t anyone’s fault, because it’s the kind of environment we grew up in,” he said.

“I was like, ‘Mawawalan ako ng career if I reveal I’m bisexual, which has nothing to do with my personality,’” he added. “I was sad, but I could finally breathe easier because the secret was out. I no longer had to maintain this facade.”

As it turned out, what he thought was the end was only the beginning.

And most recently, in what he described as his career’s “biggest break yet,” Alex scored a lead role in the upcoming Hollywood movie “Glitter & Doom,” where he will be joined by Ming-Na Wen (“Mulan,” “ER,” “The Mandalorian”), Missi Pyle (“Gone Girl,” “Charlie and the Chocolate Factory,” “The Artist”) and newbie actor Alan Cammish.

“I kept on getting role offers. My followers started sharing their own stories with me on Instagram. Suddenly, my career was no longer just about my passions, but demanding my place at the table, promoting visibility and destroying stigmas on television,” said Alex, who’s currently in Mexico City, where he will be shooting until the end of October.

Produced by Speak Productions, “Glitter & Doom” is an LGBTQ + jukebox musical set to the music of the Grammy-winning folk-rock duo Indigo Girls. Alex plays Glitter, a carefree man hoping to join the circus. Then, he meets and falls in love with a charismatic musician, Doom (Alan).

“My mother is played by Ming-Na Wen, the original voice of Mulan, so I’m super excited,” said Alex, who admitted that he still can’t believe he got into Hollywood.

“It’s a big thing to be out there, not just as a Filipino, but also as a queer actor,” he said. “These are all very, very big things I can be proud of and bring to the Philippines.

Our Q&A with Alex:

Tell us more about “Glitter & Doom.”

It’s a fantastical summer romance between the title characters, Glitter and Doom. They meet by chance and there’s a spark. But they have to figure out if they really want to be together or not within the next 30 days, because Glitter is planning to join the circus, which is a passion of his. I play Glitter, who’s an easygoing character.

The story will be told through the music of the Indigo Girls. The songs are given a fresh or modern take, which will hopefully be more accessible for younger listeners.

Would you say that this is the biggest role of your career so far?

It’s a dream come true. Every day, I write in my journal how grateful I am. I tell myself, “You managed to step foot on Mexico because of your dream, passion and perseverance.”

When my parents get asked what I’m doing, they proudly say, “He’s filming a movie in Mexico!” I’m happy they’re happy.

How did you get the role?

A Los Angeles-based agent discovered me through my YouTube channel last year. He saw my videos, including my coming-out video. He champions actors of color, Asian actors, queer actors in Hollywood… He reached out to me, had me doing auditions. And it so happened that this casting call ticked all the box—European-Asian, singing, dancing, acting. 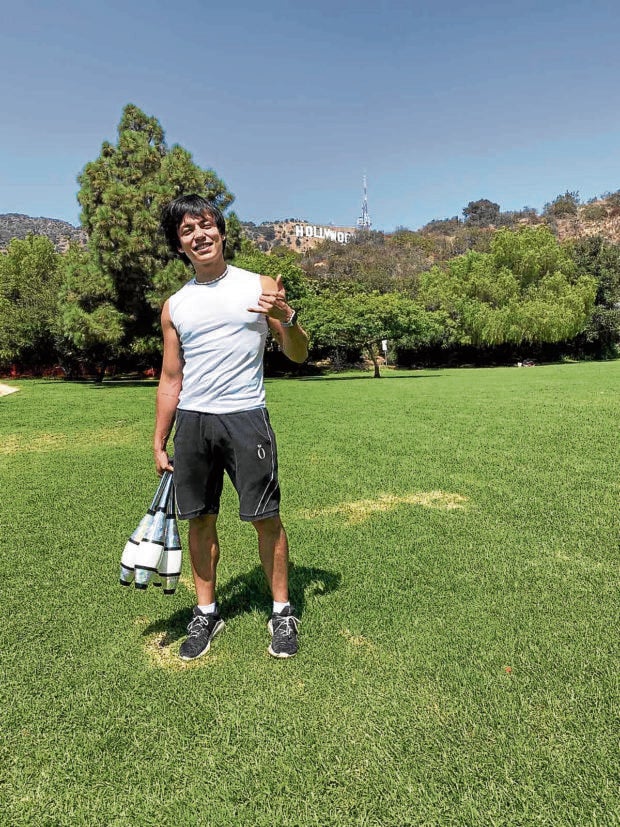 I had an initial audition via video. I got a call back and did a vocal test with the movie’s super talented music producer, Michelle Chamuel, who was the runner-up in the fourth season of “The Voice.” She wanted to hear how high and low I could sing.

I was having a swab test in Makati for an event when I received the news that I got the role. I was crying. It feels good to see that your hard work is paying off. It has been a struggle and a slow climb to get to where I am now, and getting that validation is a very nice feeling.

Any special skill you had to learn for the role?

In August, I started training at home in the Philippines… I had virtual sessions on voice and juggling. But the really challenging part was juggling. I have had experience with ballet, contemporary jazz, tap and gymnastics, but had no idea how to juggle pins.

I then flew to Los Angeles, then to Mexico City, where I was shuttled between recording, workshops and training with the circus crew. I was also taught how to act big—the art of “clowning.” Physical comedy is difficult, but I was lucky everything fell into place before filming started. 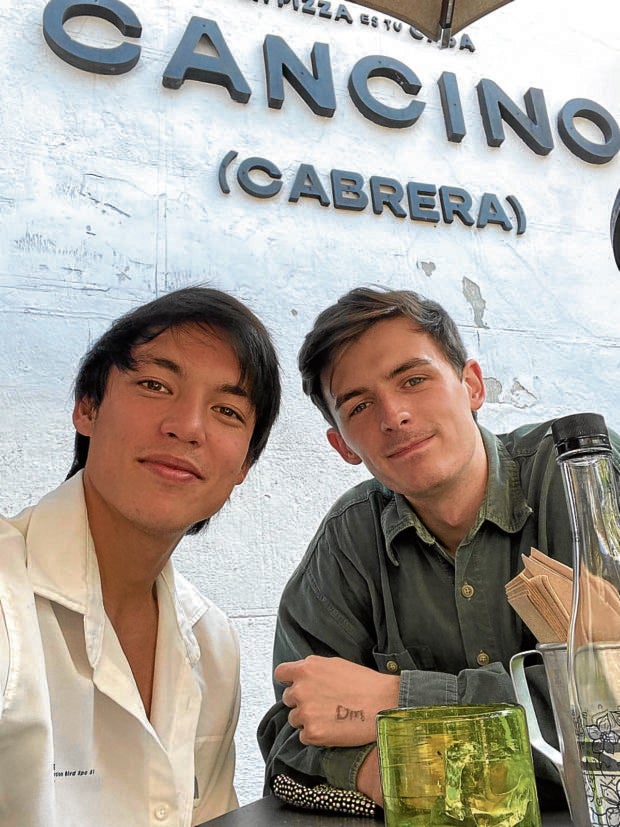 But the dancing and singing, you had down pat?

I had the range, but my character sings a lot of harmonies, which isn’t my strength. So I had to work on my technique, and it’s a bit of challenge—but we got this!

Do you feel that all the experiences you’ve had led you to this opportunity?

I’m a firm believer that all the good, bad and every single thing that has happened to you prepares you for moments to come. It’s all about allowing your spirit to rise to meet the version of yourself you’re envisioning. I have been here in show biz for nine years, so it’s also about timing. And I think God put me in situations that prepared me for this.

You said that your climb here in show biz has been hard. How did you keep yourself motivated?

Yes, there were moments where you go, “Para sa ‘kin ba ‘to? That’s when you have to remind yourself of who you are and what you can bring to the table. You have to pursue your dreams relentlessly. Don’t always take no for an answer, because only you can tell your stories. No actor has the same set of experiences as you. You have to be unapologetic.

Do you think our local audiences are starting to be more open to seeing queer actors in leading roles?

We still have a long way to go. I dream of having content featuring queer characters, but the story isn’t about love. Maybe a suspense thriller with characters that just happen to be queer, but it’s not their defining trait. I’d say we’re in an exploratory phase when it comes to inclusive content.

Did coming out allow you to tap a part of your artistry that you were unable to before?

I think the essence of being an actor is understanding who you are on the inside, being connected to your divine traits. When I was in the closet, I found myself overthinking my actions, “Is this too feminine? Is this too masculine?” Now that I’m out, I get to be who I am and have always been. It’s just that other people will try to define you or put a label on you.

My fans loved me through my darkest hours. Now I can just be authentic—and that’s a key to being an actor.