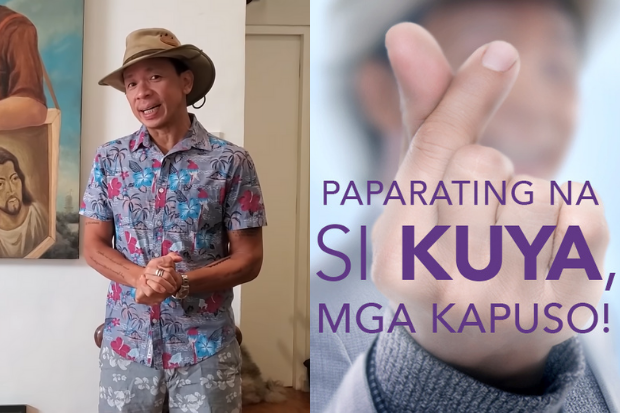 It appears longtime Kapamilya Kim Atienza will no longer be appearing on ABS-CBN as GMA teased a certain “Kuya” joining the network.

GMA Network told fans that “Kuya” will be coming to the network “soon,” as seen on a teaser poster on its Facebook page today, Sept. 29. The poster also shows a blurred photo of the new GMA talent gesturing finger heart.

GMA did not provide further details about the unidentified personality, though eagle-eyed fans speculated the network was referring to “TV Patrol” weather anchor Atienza.

saw kuya kim trending and apparently lumipat na sya ng gma? aahhh goodbye to weather weather lang 😭😭 he was such an icon but hopefully he continue to grow in gma

Meanwhile, @caratsalawahan also expressed sadness over the possible transfer, but believes Atienza will move to a new network “for the good.”

“He has a family to feed, but I just can’t help it. This is so heartbreaking,” the netizen added.

What hurts more than break-up? ICONS of ABS-CBN leaving the network. 😭😭 Matanglawin and Weather Weather lang is waving for farewell. I know Kuya Kim did it for the good. He has a family to feed. But I just can't help it. This is so heartbreaking 😭😭😭😭😭 pic.twitter.com/3ZWvD0aqKV

Aside from the teaser poster, Atienza also appeared to have alluded to the transfer through a Facebook Live video yesterday, Sept. 28.

Atienza stressed that he could not give specific details about the “transition,” but urged viewers to watch the ABS-CBN news program “TV Patrol” on Friday, Oct. 1. He said the Friday newscast would be a “very historical day” for the show.

Atienza has appeared as a host in several ABS-CBN shows, such as the morning show “Umagang Kay Ganda,” noontime variety program “It’s Showtime” and the educational show “Matanglawin.”

He is also the resident news anchor for the “TV Patrol” segment “Weather-Weather Lang.”  /ra

Read Next
Britney Spears’ lawyers push for end to father’s control ahead of hearing
EDITORS' PICK
Comelec division junks petition to cancel Marcos COC for president
Acer starts the year off strong with the Aspire Vero National Geographic Edition
PH logs 37,070 more COVID-19 cases; over 33K others recover
‘Not yet the end’: Lawyer says Marcos Jr’s DQ cases to take lengthy process
The best of bayside and city living at SMDC’s Sail Residences
Over 3 Million worth of prizes to be won at Smart Padala’s SENDali Manalo Promo!
MOST READ
NBI foils escape attempt of Kerwin Espinosa, two others
Marcos camp ‘extends hand of unity’ after COC cancellation bid is thrown out
‘Not yet the end’: Lawyer says Marcos Jr’s DQ cases to traverse lengthy process
Wendell Ramos finally gets to hold his newborn for the 1st time
Don't miss out on the latest news and information.