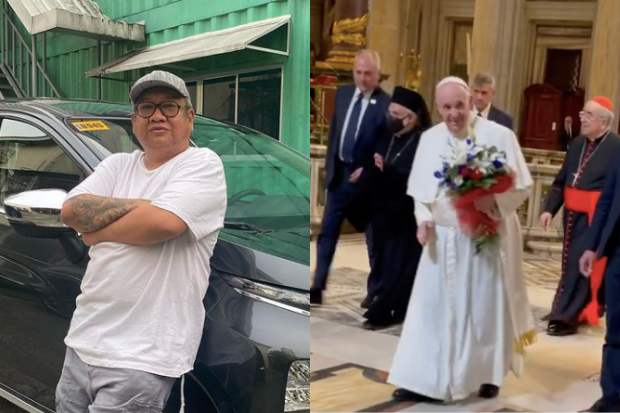 Director Erik Matti recalled his family’s experience of being blessed by Pope Francis during their recent trip to Rome, Italy.

The director and his wife, screenwriter Michiko Yamamoto, waited at the Basilica of Saint Mary Major in Rome to get a glimpse of the pope, Matti said on his Instagram and Facebook pages yesterday, Sept. 27. He showed a video of Pope Francis blessing a crowd of people while walking outside the church.

According to Matti, he had dinner with a Filipino priest who told them that Pope Francis passes by the small church to give an offering to the Virgin Mary.

“Everyone at the table [was] wide-eyed and excited at the prospect of probably seeing the Pope up close without much fanfare with an air of exclusivity that probably only us would enjoy without the world knowing about it,” he narrated.

Matti also discovered from the Filipino priest that Pope Francis “has a sweet spot for Filipinos” and would respond to “Viva Lolo Kiko.”  Kiko is a common Filipino nickname for someone named Francis.

“When we went back to our apartment, we planned the biggest, riskiest ambush of our lives: ‘Attack the church before 3 p.m. and get ready to [call the] Pope,’” he recounted. “We had all our religious objects prepared for Pope’s blessings. It will be swift and fast.”

“The Pope smiles. Blesses us all. Now, I can sin some more,” Matti quipped. “I feel I have been blessed [too.]”

Matti traveled to Venice, Italy, recently for the world premiere of “On the Job: The Missing 8” at the Venice International Film Festival. He was the film’s director.

John Arcilla, who starred in the movie, won the Best Actor award at the festival. His co-star Dennis Trillo also earned praises from the jurors including “Parasite” director Bong Joon-ho.  /ra