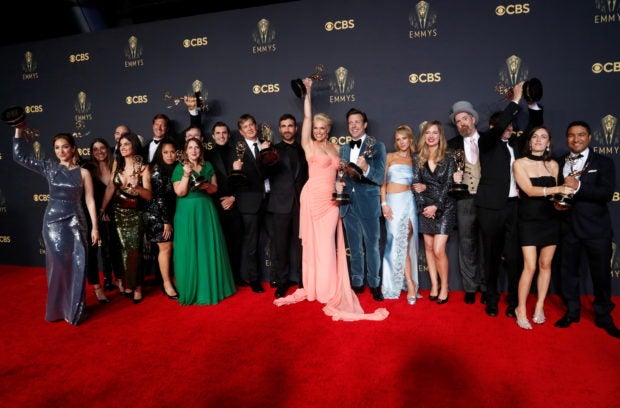 The cast and crew members of comedy series “Ted Lasso” pose for a picture with their awards at the 73rd Primetime Emmy Awards in Los Angeles, U.S., Sept. 19, 2021. Image: Reuters/Mario Anzuoni

LOS ANGELES — Apple Inc. burnished its streaming TV credentials on Sunday as “Ted Lasso” scored the Emmy award for best comedy, and Netflix Inc. landed its biggest television award to date with a best drama win for “The Crown.”

Netflix also tied the all-time record for the most Emmys in a single year with 44, a mark previously reached by ViacomCBS Inc.’s CBS broadcast network in 1974.

The honors give the streaming services new bragging rights they can use to promote their offerings in the hard-fought battle for audiences who are ditching traditional TV and searching for quality entertainment online.

Executive producer and co-creator Bill Lawrence, accepting the comedy series award, thanked the team at Apple including “T-Dog,” which he joked was his nickname for Apple CEO Tim Cook.

Since its debut, Apple TV+ has released dozens of original shows and movies and is trying to compete with not only streaming leader Netflix but also other big media companies including Walt Disney Co., AT&T Inc. and Amazon.com Inc. Those companies and others are spending billions of dollars to expand their own streaming services.

Apple has not disclosed how many people subscribe to Apple TV+, which offers only original programming, making its menu smaller than rivals that offer libraries of older TV shows and movies. Last year, it won a supporting actor trophy for the drama “The Morning Show.”

HBO, which is in the process of being sold by AT&T to Discovery Inc., had long dominated the Emmys until Netflix crashed the party in 2013, as streaming started to supplant cable subscriptions. 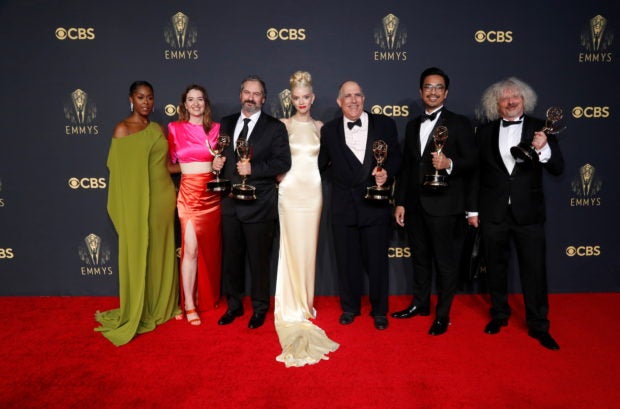 Despite racking up nominations each year, Netflix had never won an Emmy for a series until Sunday. Alongside “The Crown,” it earned best limited series honors for “The Queen’s Gambit,” the story of an orphaned girl who becomes a female chess champion.

“Thank you to Netflix,” executive producer William Horberg said as he accepted the limited series honor. “You guys did the rarest thing of all these days. You took a chance on risky material and you trusted the filmmakers.”

The HBO network and streaming service HBO Max finished second behind Netflix on Sunday with 19 wins for shows including “Mare of Easttown” and “Hacks.”