MANILA, Philippines—No violations were made in the “Born This Way” concert by controversial American pop singer Lady Gaga on Monday night at the newly-opened “The Arena” of SM Mall of Asia, said Pasay City Mayor Antonio Calixto. 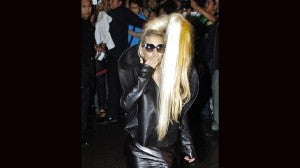 Lady Gaga blows a kiss as she arrives as fans waited at Makati Shangri-la. ARNOLD ALMACEN/INQUIRER

“The show was beautiful according to the people I sent to watch and they told me it violated no laws as per Pasay City government’s rules and regulations,” said Mayor Calixto in an interview with Den Macaranas and Susan K on Radyo Inquirer Tuesday morning.

The mayor said his people instead saw violations made by vendors outside the venue. “They had no permits,” he said.

With regards Lady Gaga’s songs, Mayor Calixto said he read the lyrics of some songs in questions and saw nothing wrong in them. “You have to you read them as a whole and not interpret them line by line,” he said.

Asked if the second concert on Tuesday night will push through, Mayor Calixto said they will still have to meet early Tuesday and he had to see the formal recommendations of his lawyers and the people he sent to watch the show.

He added he’s more excited to talk about—in his words—“the world-class” Arena of SM MOA, which his people described as very beautiful.