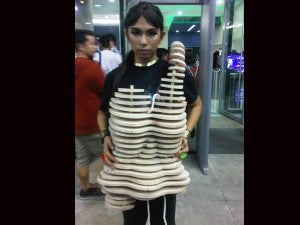 ‘STRIP THIS WAY’. Call center agent and alleged freelance theater artist JV Canta, 23, was only allowed entry to the “Born This Way Ball” at the SM MOA Arena after he removed his wooden costume. “It felt like having sex in public,” he later complained to authorities. NATHANIEL R. MELICAN, PHILIPPINE DAILY INQUIRER

MANILA, Philippines — A Lady Gaga fan is now considering his options, including a lawsuit, after he almost missed Lady Gaga’s concert on Monday night after security blocked him at the gates because of his wooden costume.

Call center agent and alleged freelance theater artist JV Canta, 23, was only allowed entry to the “Born This Way Ball” at the SM MOA Arena after he removed the costume.

“I’ll definitely think about my options tonight. I was humiliated, and while the concert was going on, friends were texting me as they watched news that I had to strip down in public,” Canta, who shelled out P5,000 for a ticket to the concert, said.

The security group in charge of the SM MOA Arena has yet to comment on the incident.

However, security guards, who refused to be named for lack of authority on the matter, said Canta was barred from entering because the costume was dangerous, as wood was hard and abrasive and could cause injuries if people bumped into it while dancing.

Canta said he felt humiliated as SM MOA Arena security guards asked him to strip down the wooden costume, consisting of dozens of pieces of wood bound together by rope and made to look like a dress, if he wanted to watch the concert.

“It’s like I had sex in public. I was literally stripped off of my rights,” he said when asked to describe how the stripping down felt like.

Canta noted that he had commissioned a friend to make the costume for P10,000. It took more than a month to make it at a woodworks shop in Quezon province, he added.

“I’m an environmentalist. Remember SM (Baguio) and all the trees cut there? This costume represents that. It also represents freedom of expression, to wear whatever I want in this country,” he said.

Concert organizers were forced to give him an event T-shirt after he was only left wearing flesh-colored body stockings to cover his upper body.

Despite the snafu, Canta said he thoroughly enjoyed the concert.

“Lady Gaga’s performance compensated for this. However, the trauma, which I will bear in my life for many years, is just too much,” he said.

Security guards said Canta was the only one who was asked to leave his costume behind on the first day of the concert.