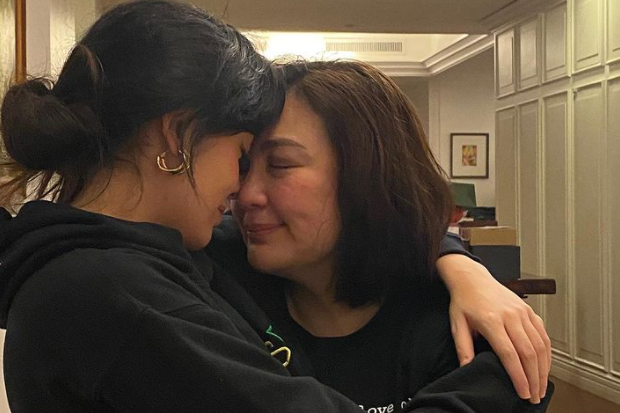 Sharon Cuneta could not help but get quite emotional as her daughter, singer Frankie Pangilinan, flew to New York to continue her college education.

The Megastar told fans that Frankie, her eldest daughter with Sen. Francis “Kiko’ Pangilinan, left for the US yesterday, Aug. 25, as seen on her Instagram page on the same day.

She described the day Frankie departed as a “very sad day for [her] whole family,” and showed a photo of herself and Frankie hugging each other.

“If my heart had already been breaking for days over her leaving and other matters, today it is in pieces,” Cuneta said. “Whenever a child of yours — especially one so loving [and] with such a pure and good heart — leaves, she takes a big piece of your heart with her.”

The actress also expressed concern for her younger daughter Miel, who considers Frankie as her “best-est friend in the whole world.”

“Over seventeen months of pandemic togetherness, my two younger girls have become only closer, stuck like glue, relying [and] depending on each other for anything [and] everything,” she added.

Cuneta said she was pleased with how her daughters bonded over the past months, but found it heartbreaking to see Miel hurt over Frankie’s leaving.

She also felt sad over the possibility that Frankie will be spending her birthday alone in quarantine when she returns to the Philippines for her Christmas break this year.

Cuneta also said the silence in her home felt “deafening” with Frankie’s absence.

“[My] heart is at once lost and bawling over missing her and feeling her absence. The sadness around here now is palpable,” she said.

The actress added that she hardly ate at Kiko’s birthday dinner, knowing that Frankie would be leaving the next day.

“I love you so very much, my Baba. Take care of yourself and that large chunk of Mama’s heart which you took with you tonight,” she told her daughter.

Cuneta and her family joined Frankie when she first moved to New York in 2019. At the time, the actress refused offers for new shows so she could help her daughter settle into college life in a foreign land. Frankie has since been flying in and out of Manila during her achool breaks.  /ra