‘Love Beneath the Stars’ actors speak up on ‘toxic masculinity,’ homosexuality and Catholic teachings | Inquirer Entertainment

‘Love Beneath the Stars’ actors speak up on ‘toxic masculinity,’ homosexuality and Catholic teachings 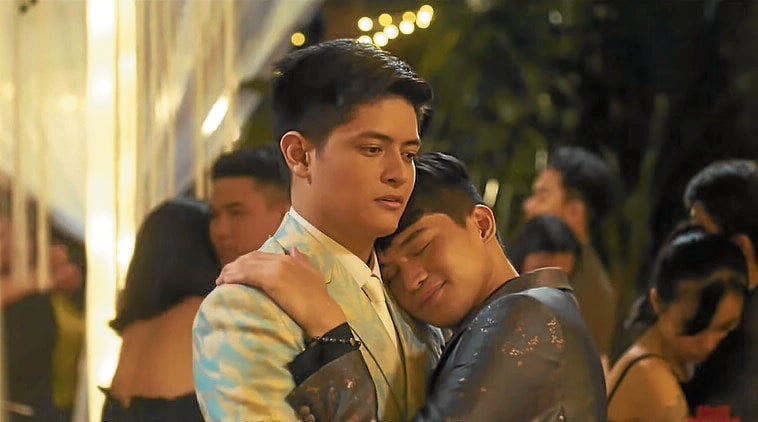 Kean Johnson (left) and Adrian Lindayag in “Love Beneath the Stars”

You don’t really want ‘toxic people’ to be a part of your life,” said Keann Johnson, one of two lead actors in the digital boys’ love (BL) series “Love Beneath the Stars,” when asked to express his thoughts on a cultural behavior that is called “toxic masculinity.”

“Whenever I meet people who are toxic when it comes to one’s masculinity, I tend to really cut them out of my life. As much as possible, you want the people around you to be positive and always supportive,” Keann told reporters during a recent virtual media gathering for the sequel to Dolly Dulu’s Filipino BL film “The Boy Foretold by the Stars.”

Toxic masculinity involves cultural pressures for men to behave in a certain way. It is the idea that men should act tough and avoid showing any emotion. It is believed that this can actually affect their mental health and have “toxic” effects on society.

“Luckily, I’ve never really met anyone who has shown me this particular type of negativity because, of course, people know my background,” said Keann, whose mom, Chickoi Johnson, is an out and proud member of the LGBTQ+ community. “Although I’m really straight and I’m comfortable with myself, there are also times when I can be soft. The reason for this is because it doesn’t really matter to me. I am who I am, and if you cannot accept me then it’s better if you move on with your life without me.”

Keann further said: “In general, we should try to reduce toxic masculinity as much as possible, if only for the youth. We don’t really want to influence them to be negative; to tell them that men should always be strong and that men should never cry. This type of toxicity affects a lot of men nowadays. They become afraid to express their feelings because they’re expected to be hard and strong, but deep inside they’re really hurting. This series tries to be a good influence by showing that toxic masculinity does exist.”

In the film, Keann plays Luke, a senior high school student of an all-boys Catholic school, who comes to terms with his sexuality when he falls in love with his batchmate, Dominic (played by Adrian Lindayag).

Their love story continues in this coming-of-age digital series, where they officially become a couple. However, a video scandal, a third party, and the disapproval of grown-ups will put their romance on the rocks and their future up in the air.

While Keann tried to orient people on the existence of toxic masculinity, Adrian attempted to reconcile homosexuality with Catholic teachings. “Quoting a line by Dominic in the film, I say, ‘To love is to honor God because God is love.’ I would very much like to believe that, because I have gone through a lot emotionally while growing up in a conservative Catholic family. As a result, I grew up hating myself. I refused to acknowledge my true feelings because I was taught that to be attracted to boys is forbidden.”

Adrian recalled: “It was only during college when I studied in De La Salle, that I learned about the different Sogie (sexual orientation, gender identity and expression), the different faiths and the different beliefs in the world. I became a liberal—too liberal, in fact, that I almost ended up an atheist. This didn’t last long, though, because I’m fundamentally a very spiritual person. I’ve now reached the point when I’ve successfully merged my truth as a person and my relationship with my God.”

Adrian pointed out that homosexuality is not a choice. “We have to understand that if only I had a choice then I would choose to be straight because life is so much easier, but I wasn’t born that way. I have natural urges, kasi bakla ako. I have both a masculine and a feminine side. I embrace all those qualities and I think my purpose is to live out my truth. I hope that, through the series, people will be able to realize their truths, too.”

“The Boy Foretold by the Stars,” which won second best picture at the 2020 Metro Manila Film Festival, is also currently streaming for free on iWantTFC.