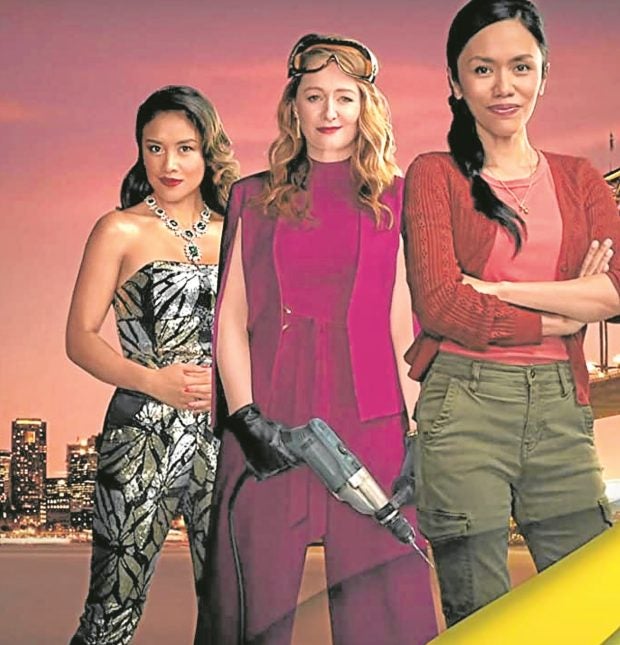 For US-based Filipino actress Aina Dumlao, getting cast as Gerlie Bernardo, a Filipino nurse suffering through the physical aftermath of COVID-19, the Season 17 finale of “Grey’s Anatomy” (“Someone Saved My Life Tonight) was nothing short of groundbreaking.

After all, it’s ridiculous to extol the indispensability of Pinoy medical workers on the front lines of America’s war against the coronavirus and not see a single Filipino face on network TV’s a-dime-a-dozen medical shows.

Case in point: A CNN report revealed last December that a third of the nurses who had died because of COVID were Filipinos. It makes you think that, while they proselytize about the importance of diversity, that otherwise well-meaning sentiment doesn’t really extend to Filipino-Americans and OFWs (overseas Filipino workers).

But Aina’s June 3 appearance in “Grey’s Anatomy” has certainly been a step in the right direction.

While the 32-year-old actress has had roles in high-profile shows like Lucas Till’s action series “MacGyver” (as Andie Lee) and the Dwayne Johnson starrer “Ballers” (as Natalie), the actress told us that it was her “short but sweet” stint in “Grey’s Anatomy” that really helped introduce her to a wider audience. It’s not the type of success that happened overnight, however.

“As they say, an overnight success is 10 years in the making (laughs),” Aina mused. “I’m thrilled about the way ‘Grey’s Anatomy’ broke through the Filipino community. The role truly resonated with a lot of nurses everywhere and had the maximum impact. Like, all of a sudden, on the day the episode aired, I opened Twitter and Instagram and my phone was making all sorts of sound!

“I was getting very emotional messages from Filipinos all over the world. And that, for me, was the reason why I wanted to be an actor—because I’d like to reach as many people as possible. My husband (actor-director Bru Muller) looked at me and said, ‘Are you crying?’ I’m like, ‘Yeah, shut up (laughs)!’ So, that’s what I would consider my breakthrough. But in terms of the story, scope and size of role and story, that would be ‘The Unusual Suspects.’”

Truth be told, it was SBS TV’s “The Unusual Suspects,” the four-episode Australian TV series, which began airing on June 3, that convinced us why Aina deserves bigger roles and longer screen time on mainstream television.

After our Inquirer colleague Tash Verayo de Villa told us how much fun she had watching the show, we sat through all four of its episodes and was blown away by the quirky Filipino characters who, despite their individual woes, don’t see themselves as victims! Everybody was topnotch but Aina’s performance was something else.

“The Unusual Suspects” is a heist caper about a $16-million necklace that is stolen from the home of self-made Filipino businesswoman Roxanne Waters (Michelle Vergara Moore) during her twins’ extravagant birthday party in Sydney’s glamorous Eastern suburbs.

This breezy romp is topbilled by Miranda Otto (Eowyn in “The Lord of the Rings” films, Aunt Zelda Spellman in “Chilling Adventures of Sabrina”) as Sara Beasley, a cash-strapped influencer hoping to monetize her social media might.

Sharing the screen with Miranda is a string of terrific Filipino actresses who portrays each character with as much verve as crowd-pleasing gusto—among them Michelle (Roxanne), Lena Cruz (Amy), Susana Downes (Gigi) and the scene-stealing Aina, as everybody’s Yaya Evie in the Beasley household. 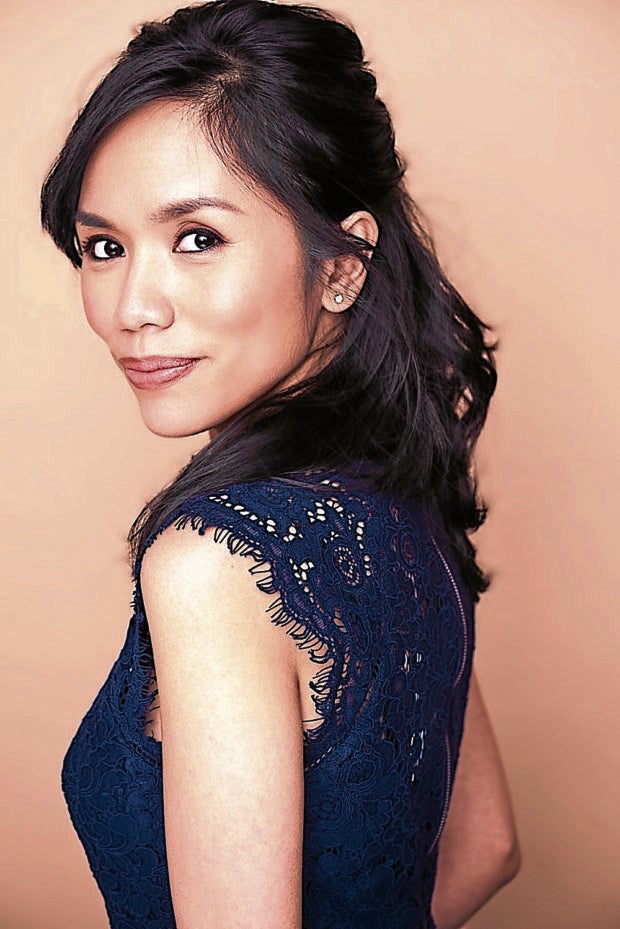 The series is a must-see, particularly for Filipino viewers because of the playful but not disrespectful way it addresses its issues and references Pinoy culture—like those humongous “balikbayan” boxes, pansit, kutsinta, Jollibee, our deep Marian devotion, as well as lines like “Rarampa tayo a la Catriona Gray.”

So, the minute we finished the series, we immediately got in touch with Aina for this exclusive Q&A on Zoom:

You’ve been in the States for almost 11 years and have been acting for seven. Can you talk about your Filipino roots and why you relocated to the States?

Batang Kyusi (Quezon City) po ako (laughs), that’s where I was born and raised. And my mom Prossy (Eufrosina) still lives in the Philippines. I’m based in Los Angeles now. I was supposed to fly home last year, but COVID messed everything up, so I’m missing everybody a little extra this year.

To make a long story short, I moved here because of love (laughs). At the time, I was already traveling back and forth because I had a business in the Philippines. Then, I met my husband. We’ve been married for almost 11 years now.

In a nutshell, what is “The Unusual Suspects” about? And why did series creator Jessica Redenbach put in a lot of Filipino characters in the series? Is she Pinoy?

No, she’s white and Australian. But this story began from the character of Gigi, played by Susana Downes in the show, who is inspired by one of her best friends growing up. So, she’s deeply entrenched in the Filipino community and the Filipino story.

It all came together because Jessica met Miranda Otto and, from there, it bloomed into this story about female empowerment and friendship. It’s unique because there’s never been a Filipino tale told this way. And as you were saying, it’s not about victimhood; it’s about Filipinas who, despite their situations, decide to take back their power. That’s what makes the show exciting and fun.

When was this shot and for how long?

We shot this for three months, from September to November last year. We were supposed to begin filming in 2019, but then they had a little bit of rewrites. Then, there were bushfires in Australia, where this was shot. Then, the pandemic happened. By May last year, we were unsure if it was going to happen at all. 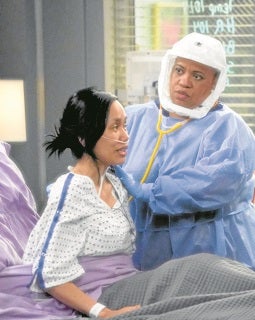 As a COVID-stricken Filipino nurse (with Chandra Wilson, right) in “Grey’s Anatomy” —PHOTO COURTESY OF ABC

I’m the only non-Australian in the cast. They took a chance and asked the Australian government to grant me special permission to enter the country in the middle of COVID.

How did you get the lead role?

Through a fellow Filipino-American actress. She auditioned for the role that Michelle plays. She doesn’t speak Filipino, so she asked me to coach her and also audition for the role of Amy (Lena Cruz). But the casting directors in Australia said, “Send us Aina’s reel and bio, but she’s going for Evie.” And the rest is history.

She’s fantastic! I grew up watching her in “Lord of the Rings.” She’s such a truthful, committed actor. When you’re face-to-face in a scene with her, you see reality melt away, and your scene becomes the new reality. It’s the part I like best about acting, when you can be a different version of yourself.

Do you see the show pursuing a second season?

Here’s the problem: SBS, which funded the show, has never done Season 2s—that’s not their model. But there’s a huge clamor from people who’ve seen it. They’re saying, “Come on, SBS. You made the rules, you can break it!”

You cowrote, codirected and acted in the award-winning short “Diwa” with your husband Bru. What is it about?

We shot it in 2017 and it premiered in 2018. It’s a film about an undocumented Filipino immigrant. It’s hard-hitting and shows how broken the immigration system is here in America, and how people like Diwa, who doesn’t have her family with her, flies under the radar.

How did you end up playing Gerlie Bernardo in “Grey’s Anatomy”?

Well, my manager Matt Kniaz is amazing! He pitched me for the role and I auditioned, which wasn’t in a room because of COVID. So, you turn on a camera and put yourself on tape. Luckily, my husband is also an actor and director, so he helped me fine-tune the audition till we felt happy about it.

The next day, they said, “Hey, we’d like Aina to take a COVID test tomorrow. Is she available?” I said, “COVID test what? Oh, I got the role! Yay.” It happened very fast.

What was it like sharing a scene with Ellen Pompeo?

It was surreal. When I booked the role, I got butterflies in my stomach because you don’t know anyone. And I was thinking, “Will they be nice to me? Is it going to feel weird?”

But she’s really a crackup. She likes making jokes in between takes, so she makes the mood light. After that, I wasn’t nervous anymore, because everybody made me feel comfortable. They were warm and welcoming.

Would you be willing to make a film in the Philippines?

Absolutely. I have a feature film that my husband is polishing right now—a 134-page feature film called “Sana.” Portions of it will be shot in the Philippines, LA and Australia. Without giving away too much of the story, it’s a little bit about my life, of growing up in the Philippines and my relationship with my dad, who has since passed. But it’s not a drama; it’s a comedy.

I hope by the time that we get funding, the world is opened up because I really would like to spend time in the Philippines and work with the crew there. My mom has never been to a film set, so I’d also like to have my family experience that. Then, I can show her around and say, “Mom, this is what the camera looks like. But when we say, ‘Action,’ you cannot talk!’ (Laughs)” INQ

Read Next
Why Max Collins is feeling ‘mom guilt’
EDITORS' PICK
Municipal court in Pangasinan sets arraignment for ‘Lolo Narding’
Gov’t eyeing COVID-19 tests in pharmacies
Acer starts the year off strong with the Aspire Vero National Geographic Edition
Gear up and get ready to play with Yamaha Mio Gear
31,173 new COVID-19 cases push PH’s active tally to 275,364
Mobile COVID-19 vaccination for commuters, transport workers set at PITX
MOST READ
Imelda Marcos trends on Twitter after octogenarian jailed for allegedly stealing mangoes
Octogenarian jailed for ‘stealing mangoes’ freed after people chip in for bail
If elected VP, Sara Duterte will push for mandatory military service for all Filipinos
Help pours in for octogenarian jailed for ‘stealing’ mangoes in Pangasinan
Don't miss out on the latest news and information.