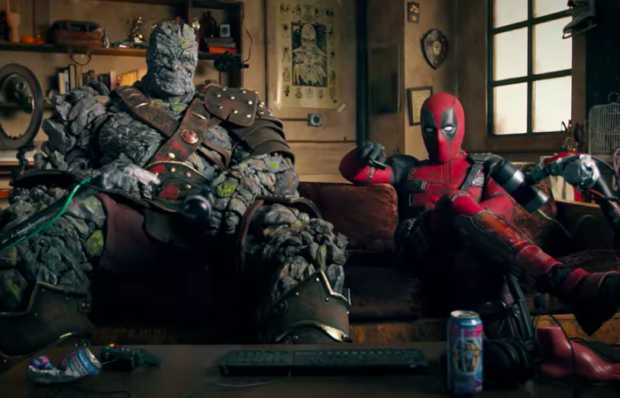 Korg and Deadpool “react” to the trailer for “Free Guy.” Image: screengrab from Facebook/@VancityReynolds

In an unexpected yet clever way to promote their new movie, Ryan Reynolds and Taika Waititi took on their Marvel personas to “react” to the “Free Guy” trailer.

Reynolds and Waititi, in character as Deadpool and Korg, respectively, parodied YouTube reaction channels by setting up their own one aptly titled “Deadpool Maximum Reactions.”

“One’s a fast-talking morally flexible anti-hero. The other is definitely not The Thing. Together they make… corporate synergy!!!” Reynolds posted on Facebook yesterday, July 13, along with the said “reaction” video.

One’s a fast-talking morally flexible anti-hero. The other is definitely not The Thing. Together they make… corporate synergy!!!

In true Deadpool meta fashion, the Merc with the Mouth hilariously pulls off, advertising an upcoming movie that is completely unrelated to the Marvel universe—while also making fun of it.

“Free Guy” and “Deadpool” are both under 20th Century Studios, which makes this “reaction” video using the Marvel characters possible.

The “collab” between the two Marvel characters is also, unofficially, Deadpool’s debut into the Marvel Cinematic Universe (MCU), as Korg is part of the “Thor” franchise.

Waititi’s Korg has been loved by fans since his debut in “Thor: Raganarok” in 2017, while Reynolds’ Deadpool has had two movies so far since 2016.

The two also previously worked in DC’s “Green Lantern,” a film often seen in a negative light that even Deadpool “shot” Reynolds when he first received the script back in the end credits scene of “Deadpool 2.”

“This is the third FIRST TIME I’ve ever worked with Ryan Rennolds,” Waititi tweeted yesterday as he shared the video, disregarding “Green Lantern” altogether.

This is the third FIRST TIME I've ever worked with Ryan Rennolds. @FreeGuyMovie in theatres AUGUST 13. #ReactionVideo https://t.co/EkWHN4ODhd

“Free Guy” will focus on Reynolds’ character called Guy, a non-playable character in a video game that becomes self aware with the help of video game developer Milly played by Jodie Comer. It is set to release on Aug. 13.  /ra

Don Cheadle on Emmy nod for ‘Falcon and the Winter Soldier’ cameo: ‘I don’t get it either’